Talking Tom: Gold Run 2 is a cool runner in which Tom the cat and his friends have to find insidious raccoons. The problem is that raccoons used a time machine and can now be in any time era. Explore colorful territories, collecting bars of gold along the way to buy boosters. Constantly run forward, as the portal will close soon, and there is still a lot to explore. Collect crystals to discover new worlds, find parallel, interesting paths to run and participate in fun challenges. Finding yourself in the next period, do not think that it will be an easy walk. Raccoons do not sleep and want to get treasure faster than Tom and his friends. Only speed, the right choice of direction and side paths allow you to run to the finish line before your rivals and take possession of valuables. Dress the heroes in special outfits for the given time and collect unique stickers from the places you have visited. Download Bob’s World – Super Adventure and Zombeast: Survival Zombie Shooter.

Talking Tom: Gold Run 2 is part of the most famous series of games. The new project is already in great demand among users.

Run through time in different eras

A distinctive feature of Talking Tom: Gold Run 2 is the fact that users will be able to visit several time eras. Tom and his brave friends invented a time machine, but the raccoons took possession of the device and went back in time to collect all the treasures. Now you have to open portals to the past independently in order to personally see the majestic ancient worlds. Visit the legendary pirate state or head to the majestic Aztec temple. Race along prehistoric roads and visit the very distant past to escape from huge dinosaurs. The locations in the application are very diverse, you just have to explore them all and get your gold back. 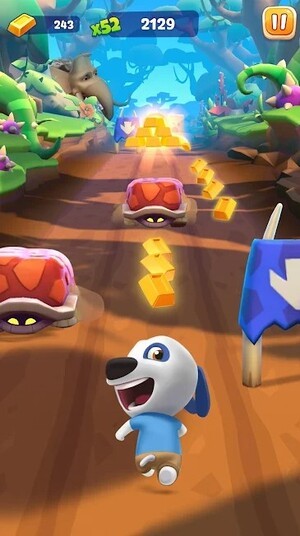 The jogging path usually consists of three lanes. You are free to choose which one to run along. Gold can be located in such a way that it is impossible to collect it all at once. Do not be greedy and choose the most convenient way, because you will have to start all over again after the defeat.

It happens that out of three lanes, only one or two remain free. It is important to see such moments in advance and prepare for them. Most often, there are three types of obstacles. Some need to run around, the second – to jump over, under the third to ride. Do all this with light finger movements on the screen. It is also possible to change lanes in a jump, simply by swiping your finger in the desired direction at the right time.

Unlock all heroes and upgrade them

The running process of Talking Tom: Gold Run 2 features many innovations. There are many characters in the game. However, you need to build all the necessary buildings for the current character in order to open them. For Tom, this is the house and the pool next to him. Each building has several improvements that require gold bars to build. Thus, the more gold you collect at the level, the faster you can pump a new character. Now, many heroes are not available, but the developers promise to regularly update the content and fix everything as soon as possible.

After installing the application in question, you will find that playing Talking Tom Gold Run 2 is best with bonuses. There are several of them, consider some of them: 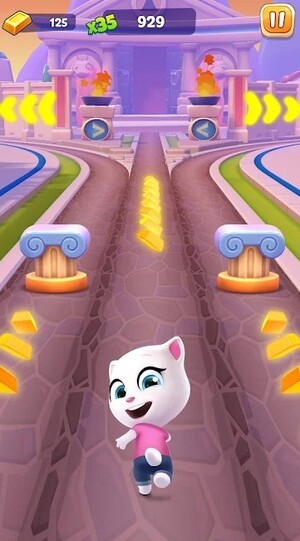 Bonuses are limited in time, so you should be very careful when using them. Please note that you cannot use several at once.

Talking Tom: Gold Run 2 has its own recognizable gameplay specifics, nice graphics and great gaming opportunities. The application is very user-friendly, so anyone can play it, even the youngest gamer.

You will come across gold bars on the way. Use them to purchase chests with unknown reward. Unfortunately, the player does not receive as much gold as he would like. However, it is possible to fix this problem by downloading the Talking Tom: Gold Run 2 mod APK for unlimited gold.

Speaking in general about the concept used in Talking Tom: Gold Run 2, it strongly resembles a classic runner. You just have to run around the location, collect scattered objects, jump over obstacles, and choose the right path. The developers have added a lot of obstacles and forks, so you should be more careful and careful. If you hesitate even for a second, it will be very difficult to win. 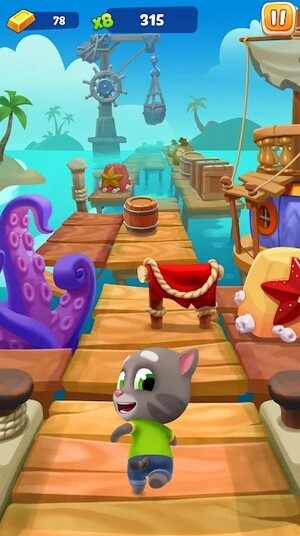 Each level has several different cards that replace each other. They differ in complexity, so it will be fun to get through them. If you look at the right side of the screen, you will see the number of bars collected and the distance. As soon as you encounter one and obstacles, the level will end, and you will need to start over. If you do not want to do this, then you need to use some explosives. Therefore, you can resurrect in the same place where you were before.

As for the characters, there are several of them in Talking Tom: Gold Run 2. Besides Tom, this is the white cat Angela, Tom’s friend. Ginger is a red-haired blue-eyed kitten, the nephew of the protagonist. Ben is an anthropomorphic dog, Tom’s friend, often acts as an antagonist. Hank is a friend of the hero, a white dog. Developers offer more heroes in the future.

Talking Tom: Gold Run 2 is a worthy sequel to the first part of the game, which has many innovations. If you love this franchise, then do not miss this project.