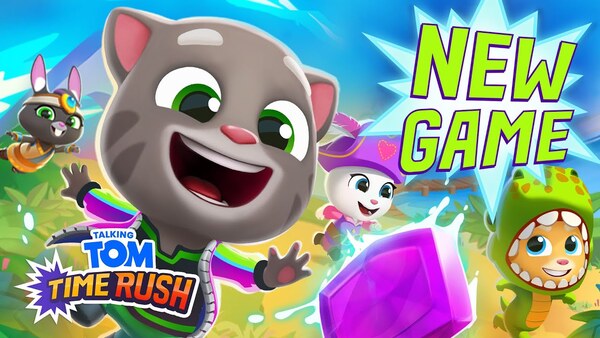 Talking Tom Time Rush is a modern entertaining application where you can enjoy every moment spent in the game. Explore incredible and fantastic worlds, collect gold and discover surprises. Tom, along with his friends, found the real Magic Gate, but a gang of obnoxious raccoons appeared out of nowhere, who always drag their friends into all sorts of troubles. The raccoons managed to steal the crystals and disappeared into one of the fantasy worlds. Well, Tom and his company have a job again. Navigate different worlds, run along different tracks, dodge traps and don’t forget to collect gold bars along the way, which raccoons drop very imprudently in an attempt to escape from you. Use different vehicles, find detours and use supersonic power-ups to get even faster. You can play as any of the characters from the very beginning of the race. We also recommend that you download My Talking Tom 2.

You have to go on an exciting adventure, exploring everything around. 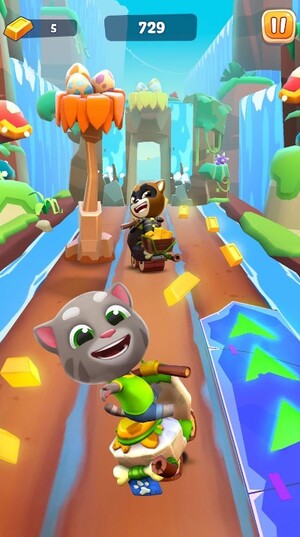 All characters are open at once

Main and secondary characters are available in Talking Tom Time Rush. As you progress through the stages, seven main characters are unlocked. If earlier they had to be unlocked during the gameplay, now you can play them from the very beginning. You should pay attention to the following heroes:

What awaits the player in this arcade runner? Judging by the name, the main goal is gold mining. Cat Tom travels, opening tracks in new locations, chasing a thief who stole gold, building various buildings on the levels. You have to guide Talking Tom through the city streets with heavy traffic. Jump over obstacles, go around the moving transport and collect bonuses, gold. 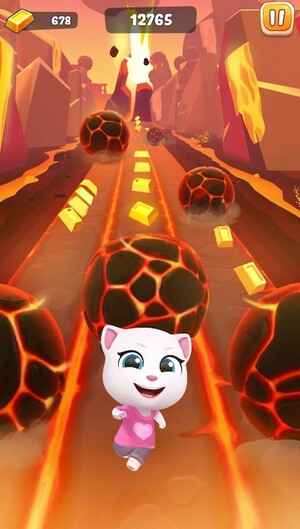 You can track the villain by the golden trail that stretches behind him. Be careful, you cannot stop the running hero. Pay attention to advertising content, watching the video, you can get valuable items, currency. It is interesting to study various little things that enliven the game picture and the perception of the environment in Talking Tom Time Rush.

Speed up your run with power-ups

What to use to improve the actions of the received heroes in Talking Tom Time Rush? The application has special items, they call them boosters or power ups. Improve these things, as they act as the characteristics of the heroes. Get them in stages. What can you grab just on the run?

Speaking in general about the concept used, it strongly resembles the classic Subway Surfer. You just have to run around the location, collect scattered objects, jump over obstacles, and much more. The developers have added a lot of obstacles, so you should be more careful and careful. If you hesitate even for a second, then it will be very difficult to get to victory. 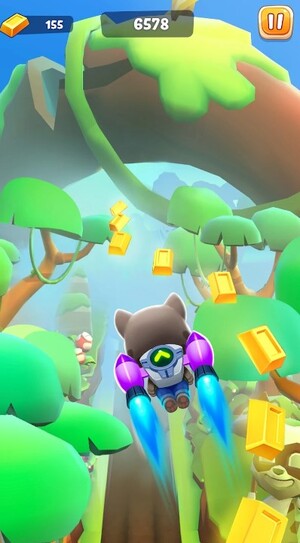 Please note that Talking Tom Time Rush requires you to collect all the gold bars. With their help, it will be possible to open new heroes in the future, buy clothes for them and purchase the necessary improvements. Try to be concentrated and attentive if you want to get more opportunities for development.

Talking Tom Time Rush is a worthy continuation of the famous series. From the start, choose any of the characters and go on a fun adventure.