Tall Man Run is a fun casual game where you control a little man. Your task is to go to the end of the set path, while collecting various points, bonuses and other useful things, thanks to which your main character will rapidly increase in size. A huge boss will be waiting for you at the end of the run, so prepare well for a meeting with him. During the run, the character will grab various multipliers. Some will make it thicker, while others will make it wider. There are also dangerous obstacles that remove the height and weight of the character. In the end, you need to run through the finish line, collect bonuses and get to the boss.

Tall Man Run is an example of a standard time killer that can distract you from everyday worries for a while. If casual games are your thing, check out Hidden Bay Museum and SpongeBob: Krusty Cook-Off. 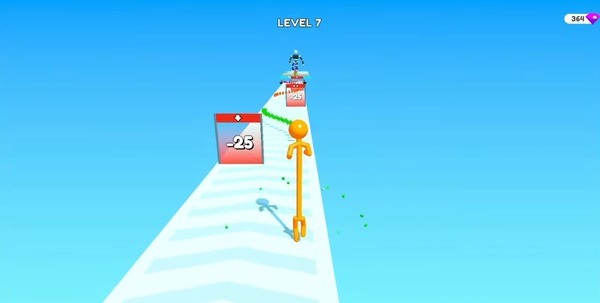 You play as a small sickly hero. He has to run along the track, which is full of surprises and obstacles. The ultimate goal of the game is to make your player stronger. How to do it? The fact is that various boosters will meet you on the road. Globally there are several types. Some make the hero a few points taller, others fatter.

There are also boosters that immediately give x2 or x3 multiplier to power and growth. However, there are also debuffs that worsen the performance of the character. Therefore, it is very important to respond in time to what is happening on the screen, maneuvering either to the right or to the left.

Go through an exciting obstacle course

In addition to boosters, you will also encounter numerous obstacles that can weaken the character on the track. Often these are just barriers standing in the middle of the road. Sometimes you can jump over with a trampoline, sometimes not. In this case, you will inevitably lose part of your body, thus becoming weaker. There are also other objects.

For example, a barrier that spins clockwise. You need to guess the time so that you can run past it without getting hurt. Moreover, it happens that other people will meet you on the road. You need to try to push them into the abyss as much as possible in order to earn more money and points.

Get to the boss and give him a crushing blow

Tall Man Run consists of levels. A huge stickman awaits you at the end of each level, which you need to try to hit so that he falls. However, getting to the enemy is not so easy. It is important that your hero was as tall and fat as possible by the end of the level. After the finish line, the character has to run through many cells, during which the hero will rapidly decrease. 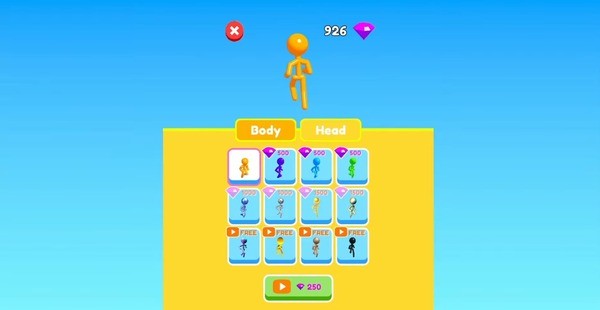 There is a possibility that a person will not reach the enemy at all and will dissolve in the air. However, if the hero was powerful enough, then you can hit a huge stickman. In this case, it will fall and you will receive additional money.

Tall Man Run has standard 2D graphics. In general, games of this kind do not pretend to have a high-quality picture, but the gameplay is much more important here. The application copes with its main function – the entertainment of the players, so the graphical shell is secondary here.

The game has a very large number of ads and even turning off the Internet does not help with this problem. This aspect found its reflection in the evaluation of the project on Google Play. To avoid this, download a mod that removes all ads from the game. In addition, you can get an unlimited amount of in-game currency. 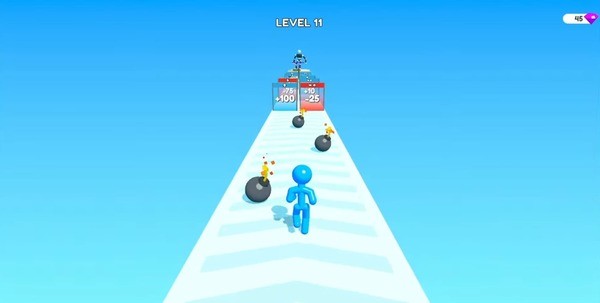 Although Tall Man Run has two currencies at once – coins and diamonds – there was initially nothing to buy here. However, later the developers introduced skins and other bonuses into the application. You can also upgrade the hero by increasing his speed, height and thickness initially. The presented project is perfect for killing a little time. Overcome level after level and try to get to the boss, inflicting a crushing blow on him.

Tall Man Run is an interesting project that requires a reaction from the player. Increase your character, grab useful bonuses and beware of negative ones. Get to the finish line and defeat the leader.