Betta Games’ arcades have become increasingly top-ranked thanks to colorful gameplay and equally gripping storylines. Most of the games from this developer are easy to control and complete. Therefore, such arcades attract Play Store users. One of these games is Tank Hero – Awesome tank war games. It is a role-playing arcade shooter where you have to face a unique challenge for the future: a war between tanks. Take responsibility for actions of one of the parties on battlefield and upgrade the tanks, setting them up for victory and success in battle. We also suggest you download The Archers 2 and Join Clash 3D.

The game managed to capture attention of fans of arcade simulators, so more than one million users have already installed the application in Play Store. Ten thousand of them rated arcade at 4.6 points. The application often hits the top in Action and Shooter genres.

Players can receive unique equipment throughout the game. These can be shells, tracks and weapons on body of the tank. You can get them in Tank Hero – Awesome tank war games both for completing levels with bosses and for viewing ads in store menu. Upgrade each tank with consumables and upgrade points. 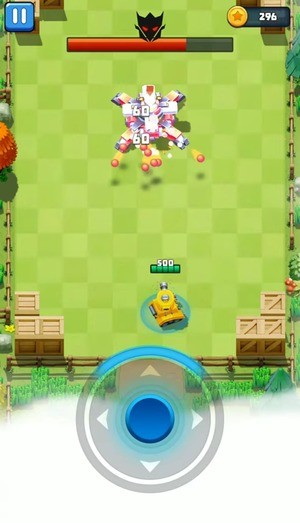 During a tank battle, the player has the opportunity to acquire a variety of skills that affect the outcome of tank battle. By defeating certain tanks, you can use a special box that stores unique skills. They can be associated with both the protection, health restoration and attack on other tanks, critical damage, speed and attack power.

Tank battles represent the gradual passage of tiers using unique skills that drop randomly from a magic box in a certain location. Each of the rooms has its own level of difficulty, so the further the player goes; the more difficult it is to defeat other tanks. However, the more difficult the level, the more rewards you can get.

The main character acts as a tank. The very first tank used in the game is a yellow “New Star”. It has the most primitive skills and power, but still does an excellent job at the first levels. However, you have the opportunity to unlock new tank models from Decay to Tesla. It is possible to obtain each of these tanks by opening chests in the store. 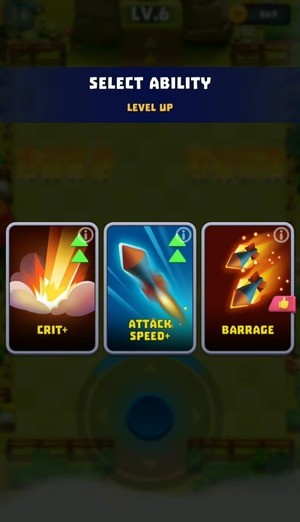 Tank Hero – Awesome tank war games features usual stylized graphics, distinguished by its colorful palette and unique tank designs. Each battle vehicle is individually styled and has its own color scheme. All battle levels also have own style, which suits the specified motive: some tanks and robots cannot attack the enemy. There are also traps of different designs and damage scales on the battlefield.

A pleasant melody acts as a soundtrack, which does not change either in the main menu or during the battle. Each action of the gamer has own sound: attacking the tank, pumping equipment, moving the battle vehicle across the battlefield, as well as sounds of other tanks.

Paid content affects almost all of the game’s currency, including unique packs and starter packs. However, there are also practically free goods: fragments of tanks, equipment, armor, as well as coins. You can get them by watching short videos in the game. Nevertheless, this approach does not suit many users, so we provide players with opportunity to install Tank Hero – Awesome tank war games with a built-in mod. It opens up the opportunity to receive modules and fragments free, without watching advertising videos.

Our team has checked mod functionality on several devices and analyzed how safe the game is for other users. Indeed, provided mod works great. Now you don’t need to watch ads to get free stuff. At the same time, the game does not pose any danger to device safety, so everyone can enjoy the game. 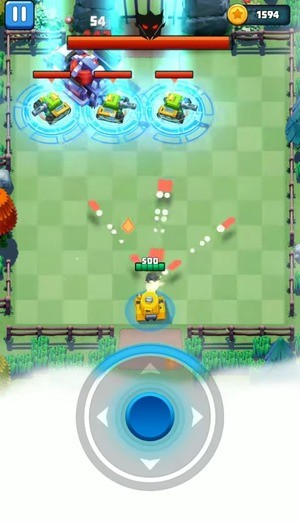 Tank Hero – Awesome tank war games starts with the very first room raid. The tank battle takes place from the very first tier, where the weakest vehicles on tracks are located. It is also possible to learn tank controls here: the game pad serves as control for the tank. Using the gamepad, main character can move around the field. While clicking on the tank, the player automatically prepares him for a new attack.

By pressing specified key, the character gains strength for subsequent attack. After destruction of certain tanks, player gets access to skill selection function. There you can select the desired option for his hero.

Main menu allows players to familiarize with the existing tank and future in-game shop opportunities. Six slots for equipment are available for each tank and you can obtain it in the Store. In addition, there is the WORLD tab, which allows the player to communicate with the same gamers around the world.

Tank Hero – Awesome tank war games is a fast but interesting arcade strategy game that allows the player to enter the world of tanks and enjoy high-quality graphics and unique fights with aggressive opponents. Try a real battle of tanks in this app.