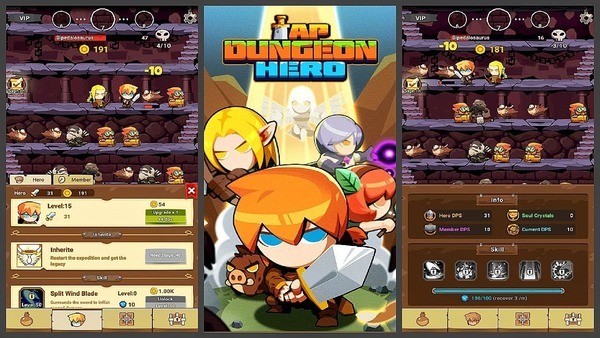 Tap Dungeon Hero: Idle Infinity RPG Game is a clicker from the developers of 6Monkeys Studio. Player is required to clear the path from the terrible monsters, passing level after level. Your hero has to go down from top to bottom and in parallel kill crowds of enemy units. Enlist the support of brave heroes and gather a whole squad of epic characters who will help you destroy common monsters and leaders. Earn coins and pump your heroes, increasing their level. Learn special talents and skills that can help you in this difficult battle. Fight without interruption, as you have over a thousand exciting locations at your disposal. Download also Fishdom and Best Friends.

Tap Dungeon Hero has over 1 million downloads and its popularity is growing steadily. The reasons for such a love – in our review.

Thousands of levels to prove yourself

Tap Dungeon Hero is divided into levels. Each of them requires going down the floors and destroying the monsters. There are usually about five enemies on one such floor. To kill them, you just need to tap on the screen. In this case, you hero will begin to swing his sword and strike at enemies. Usually, you have to fight with a boss who has significantly more life energy, as well as a stronger blow. In total, there are more than a thousand such levels in the game. Many of them differ in external design, as well as the enemies that fill it. If the battles are extremely simple at the beginning and player does not have to strain, then everything becomes much more complicated in the future. 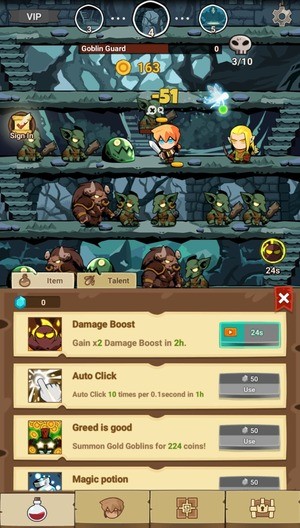 Your protagonist in Tap Dungeon Hero has options for improvements. Otherwise, he will deliver too weak hits. Improvement takes place for the coins that you can find on the levels. You can increase both the level of the hero and acquire new characters. The higher your level, the harder you hit enemies. Next, you will unlock new heroes, each of which has its own abilities. If initially you play as a swordsman, then the next will be an archer who covers positions from afar, destroying enemies at a distance. Subsequently, it is possible to organize a whole team – there are more than 20 heroes in the game. The main thing is not to stop tapping.

Use skills to make your heroes even stronger

Each of the characters has certain abilities and skills on a short-term or permanent basis. Therefore, for a few seconds, you can dramatically increase the power of your blow, which will crush enemies much faster. There are also premium skills that are available only for crystals – Tap Dungeon Hero donated currency. In general, active and passive skills are available for upgrades here. The former only temporarily make the character stronger and the latter permanently. Do not forget that over time there will be many wards, so you need to keep track of all the heroes and improve them in a timely manner. 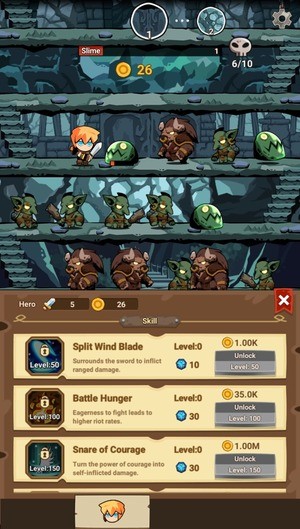 Tap Dungeon Hero features a side view. The environment in the game is static, however, all characters, as well as enemies, are very high quality traced and have many animations. We can say the same about the skills used. There is practically no sound in the application, but this is not a big disadvantage.

You need coins to upgrade your heroes. It’s quite difficult to earn them, which is why pumping here is extremely long. However, you can easily solve this problem by downloading the mod for unlimited money. It works in such a way that the number of coins does not decrease, even when you make a character improvement. You still won’t be able to pump the maximum level right away, but it is quite possible to significantly speed up the pumping.

The plot of Tap Dungeon Hero is quite simple. The player represents good, and the army of monsters is evil. In the originally heavenly places, terrible creatures have settled and the heroes have to fight with them. Despite the fact that the inhabitants of the kingdom have not fought wars and made weapons for a long time, they were able to muster up their strength to resist the advancing army. The main task of the player is to prevent opponents from gaining their maximum strength in order to plunge the entire kingdom into chaos. 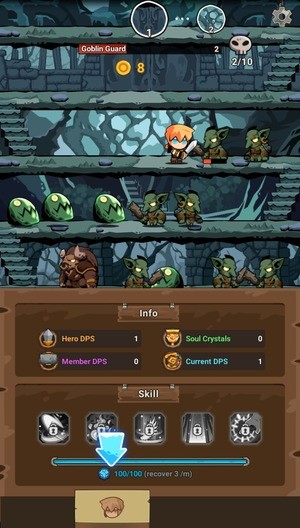 To confront the army, the player must recruit various heroes into his squad. They can be of various classes, among them there are both arrows and warriors, as well as strong wizards who can destroy entire units with their spells. At the very beginning of the company, you can hire heroes of any class, which allows familiarizing with the basic capabilities of each of them. Subsequently, they will open gradually, so you need to assemble your squad wisely.

Each hero has a set of skills with automatic triggering. However, some of them require activation by player. This forces the player to keep track of all characters, tracking the cooldown of each skill. Micro control is becoming an important occupation. Do not forget that the team must have heroes of different classes. This not only makes the squad tactically flexible, but also allows it to perform more tasks on the battlefield, making each of its members more tenacious in the end.

Tap Dungeon Hero is a rather monotonous clicker that can still find its audience. If you are looking for a laid-back and relaxing gameplay, then this project is for you.