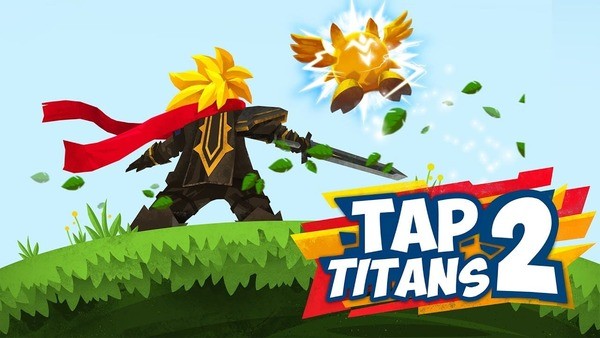 Tap Titans 2 is a continuation of role-playing game in which you play the role of the protector of all living things. Events unfold in a fantasy world where the formidable enemies of humanity – the Titans, have again invaded peaceful lands. The main character is an unnamed swordsman. He is again ready to enter into an unequal fight. You have a difficult path ahead of you, pump your character, buy the most powerful armor and weapons and then you will be able to defend your land. However, you won’t do much alone, so unite with other players, join a clan or create your own to get even more bonuses and advantages over the enemy. In addition to the players, your faithful pets and mercenaries will come to your aid, who are ready to sacrifice themselves for your salvation. Don’t forget to also download Knights of Pen and Paper 3 and Idle Animal Evolution.

Tap Titans 2 is the sequel to the fun clicker that quickly captured the attention of users. Nice graphics, unique game mechanism and a competent plot await you here. If you want to know more, read our review.

The developers have introduced a system of active skills. Each of them has its own cast interval and you need a certain amount of mana to use them. Attacks of this type inflict damage and strengthen the fighter for a certain period. You can apply them once, after which you need to wait a bit to restore the skill. Using it consumes a large amount of mana, but you can increase it with help of artifacts. The character also has benefits that affect his abilities. They can last from a couple of minutes to several days. 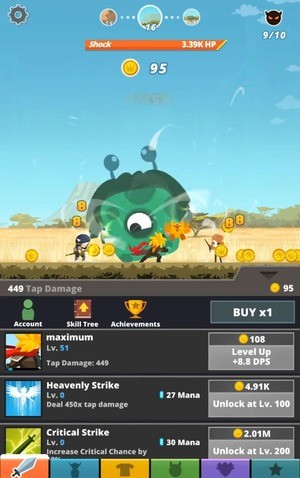 The player in Tap Titans 2 has the opportunity to recruit allies into the team to attack enemies automatically. They are divided into three classes: melee, ranged, and mages. They are great support in battle. Some skills allow you to strengthen allies. Skills also affect the protagonist. They can support it with attack, defense, speed and gold boosters.

Equipment is very important in Tap Titans 2, as it can improve your character by greatly enhancing his characteristics. Both the appearance of hero and number of bonuses received change. Get equipment in the battle with bosses highlighted in blue. They leave items after death. The stronger the villain, the better the dropped armor or weapons will be. If you do not take them on time, they will disappear and will no longer be available.

Upon reaching a certain level in Tap Titans 2, you get the opportunity to acquire a pet. They play an important role and are often very useful in battles. Your minions themselves attack the titans. The higher their level, the more influence they have on the battle course. 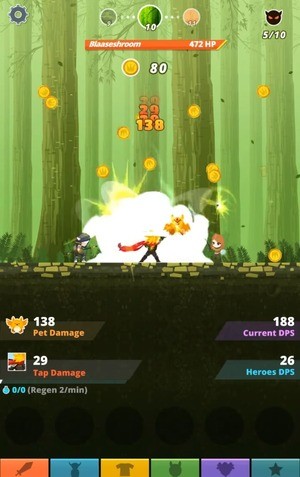 They provide the player with active and passive bonuses. Active ones appear when interacting with a specific pet. Others are influencing from the outside. You can not only buy and sell pets, but also win them in a raffle held every 4 hours.

Every Wednesday and Sunday, you can stake your prizes and take part in battles in tournaments. The algorithm automatically distributes the players to the grid. Your goal is to reach the top 1 and become the undisputed champion in order to win the highest award.

Tap Titans 2 has colorful and catchy graphics that are unlike any other projects. Together with the authentic sound component, such a picture creates the most pleasant effect for every player.

We bring to your attention a mod that removes all ads from the game. In addition, you will be able to activate the following options:

In order to take full advantage of Tap Titans 2 mod, you need to launch a special menu in upper left corner of the screen. There you need to select the improvements you are interested in and activate them. Be careful, using the mod may result in a ban!

Your main character will be a brave young warrior who is ready to rush into battle with enemies fearlessly. However, there is a small problem – your swordsman does very little damage to enemies at first and all his actions require your direct command. Gradually, you will recruit assistants to support the swordsman during the attack, so the need for constant control will disappear. 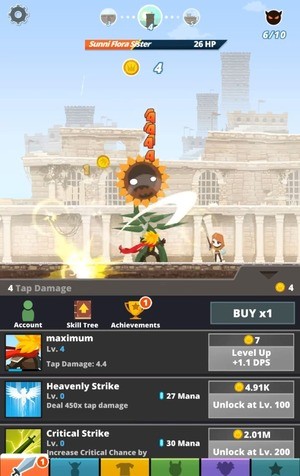 There is no bright storyline here. The application is very similar to a clicker in its design. Its only difference from this genre is the ability to hire characters of different specializations.

Your main goal in Tap Titans 2 is to enslave or destroy all enemies. To do this, you need to recruit a huge army and pump all the fighters, spending a huge amount of gold coins on this. Earn gold in the process of passing, so do not worry too much about replenishing the gold supply. However, spending too much on the acquisition of weak soldiers at initial level is also bad decision. If you do not have enough money at the most crucial moment, it will be quite a shame.

There are various clans where up to 50 players can unite. This option becomes available after level 25. You can found your own or join an existing one. There are also clan bosses here. You can defeat them only by gathering the whole team. The more people in the clan, the more effective attacks against the main enemy will be.

Downloading Tap Titans 2 is worth it for many reasons. First, it has a storyline and good gameplay. At the same time, the game is easy to control. Secondly, the popularity of the application allows you to compete and team up with other players. We should say the high-quality graphics in the game with unique graphics, which no one else has.