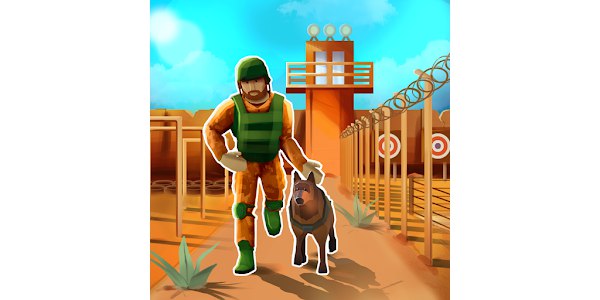 The Idle Forces Army Tycoon – become the leader of an army consisting of several game characters in this exciting clicker game with an isometric camera. Each of the characters has its own appearance and a special character, expressed in funny sayings and dialogues that take place between the warriors. Together with the squad, you will travel around the game locations, collect rewards and at the same time receive upgrades. Create the largest base for training soldiers for the upcoming battles and competent officers for command. After some time, they will grow into tough military men who have become professionals in various military operations and upcoming battles. Unlock new heroes to help in further battles against the most vile villains encountered – the mafia or even zombies. If you are interested in idle games, then download Idle Bank Tycoon and Idle Crime Detective Tycoon.

You can learn more about the game from our review. 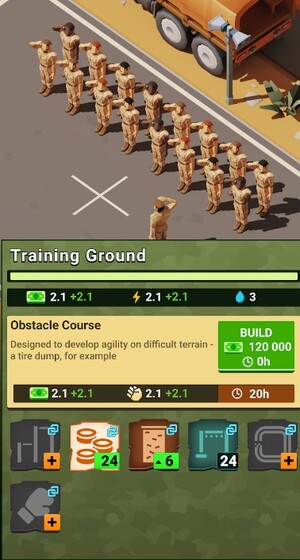 Develop your military base

Arriving at the army training camp, you work day after day, passing training programs, proving your readiness for action in the hot spots of the planet. In parallel with training, you will earn money, and then use them to increase the area of ​​the camp and its capacity: increase the speed of training and its effectiveness, and so on. It is necessary to create several zones at the base.

Training zone. Here the soldier will work on his physical form. Work out the necessary complex with jumps, squats and other exercises. Training a fighter with a Special Forces detachment in an urban environment. Teach the military how to shoot and the basics of medical training. In general, everything you need for a successful battle. That is not all that you have to learn in The Idle Forces Army Tycoon. Studying the military has never been so exciting. 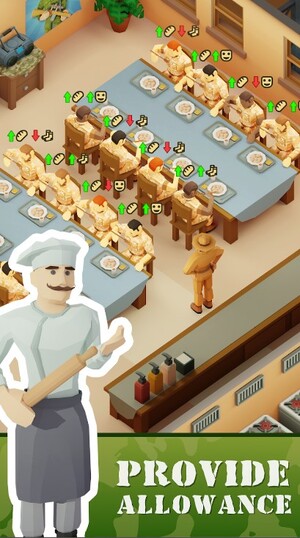 The Idle Forces Army Tycoon is a great mix of casual, strategy and casual sim elements. You will be able to try out completely unique mechanics that will bring new fresh elements. Play the role of a private who joins the army. You start your training in a training camp, where training buildings, a canteen, barracks and other army premises are located. You have to go through a difficult path from a private to an officer, while trying to pass all the tests with honor.

You have to complete a number of responsible tasks in The Idle Forces Army Tycoon Mod APK. Start your army life by mastering the training yard, where general physical training classes are held. You will have to try hard to show yourself in the face of leadership in the best light. Then you can move on to serious tests, where fighters of the elite Special Forces unit will be your opponents. Having finished with physical exercises, start shooting. 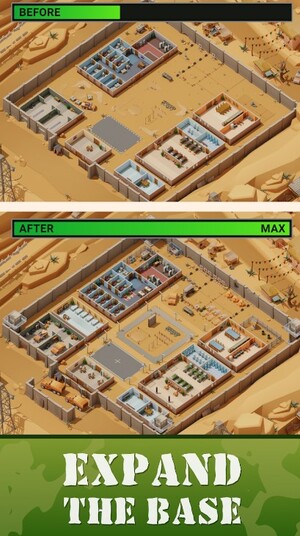 You will have a large arsenal of various weapons at your disposal, so you need your soldiers to master them perfectly. As you move from one stage to the next, you will be able to upgrade existing practices by expanding buildings and sites. Receive some amounts of money, which you can invest in the development of the army for the successful completion of the exercises, you will.

A military base is a serious structure, so you need to approach the issue of its development very responsibly. The developers of The Idle Forces Army Tycoon have taken into account this nuance, so you will find very realistic gameplay. First, prepare your soldiers in the best possible way. Increase the number of personnel, train the military and satisfy their basic needs for food, rest and sleep. Then go on peacekeeping missions. Bring democracy, peace and freedom to all corners of the globe. Get rewards from the General Staff and unlock new training bases.

The Idle Forces Army Tycoon is an exciting game where users have to recreate and develop a military base. Create a powerful army and go on dangerous missions.