The Lord of The Rings: Rise to War is an epic strategy game from NetEase where great things await the user. The fate of Middle-earth is now in your hands, join one of the factions to begin a merciless battle for the possession of the Ring of Omnipotence, which gives its owner incredible power. Explore a gigantic world created by acclaimed author J.R.R. Tolkien, from majestic castles to the sinister lands of the orcs. In order to capture new territories, you need a formidable and numerous army, so fill its ranks with various fighters who will go into battle at your command.

You also need to take care of the reliable defense of the settlement and its development, because this directly affects your power. Systematically, you will master the fantasy world, build fortifications and push the boundaries of the controlled areas. However, it will be difficult to keep these possessions on your own, so join an alliance. Then in case of a threat, your comrades will come to your aid. At the same time, attack enemies for the sake of possessing valuable resources. For strategy fans, we also recommend King of Defense: Battle Frontier and Star Trek Fleet Command.

NetEase is one of the largest Chinese mobile game developers and publishers. In the past few years, NetEase has attracted attention with several high-profile deals with Western companies for the development of mobile games for well-known franchises.

There are several basic strategic elements in The Lord of the Rings: Rise to War. Firstly, each player gets his own ring of power, which pumping brings new skills and opportunities. Improperly prioritized upgrading can affect its speed. Secondly, add new lands to the castle not automatically with the pumping, but by force. Again, you should prioritize land types to avoid running out of resources. Thirdly, you need to be more careful about the types and combinations of troops and skills of commanders in order to increase their effectiveness. 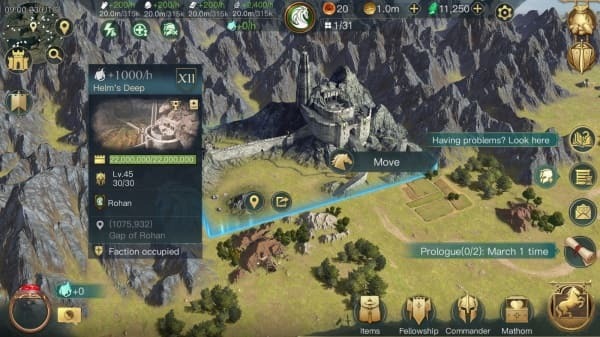 Players are free to choose one of the available factions – Lothlorien, Erebor, Rohan, Gondor, Isengard and Mordor. Although players are urged not to attack the “allied” castles, but no one will interfere with organizing a local civil war in Mordor or Rohan. Castles of other factions are far away, and neighbors have something to profit. Less bloodthirsty players entertain themselves by completing tasks, battling neutrals, participating in events, collecting commanders and chatting. A regular story campaign is also available.

Players of The Lord of the Rings: Rise to War cannot be successful conquerors without an army. Your troops will have commanders, and first, you should pay attention to their pumping. However, do not forget about ordinary units, especially since later they can turn into elite warriors. To get these units, you need many buildings. They are different for each faction. Base development may seem daunting, but remember to upgrade the main hall first. As you level it up, you can upgrade other buildings as well. Another life hack – keep an eye on the level of resources, and especially wheat, needed for new units and for more experience in battle. 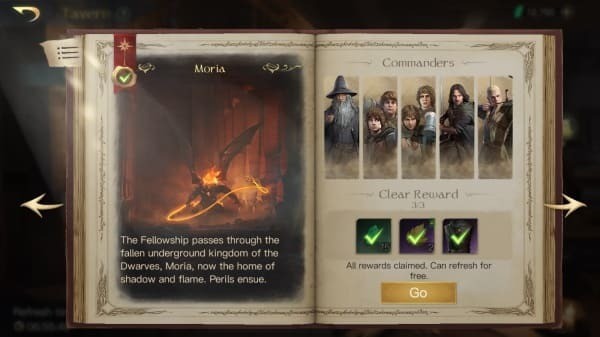 Beautiful videos, pretentious orchestral music, faces of the heroes of Peter Jackson’s trilogy greet you at the launch of The Lord of the Rings: Rise to War. For players who are familiar with films firsthand, immersion in the world of Middle-earth will be instantaneous. You will definitely love the music and images.

To become more successful during battles, we suggest you download The Lord of the Rings: Rise to War mod, which gives you the opportunity to use the god mode. Just open special menu, adjust damage, and defense parameters, as you wish. However, this mod is valid only in the single player campaign.

Time is the most precious resource in The Lord of the Rings: Rise to War, so make sure you use it right. Time will be useful both for the construction of buildings and for sending the army to the point of hostilities. You have to wait a lot, and therefore it is better to play the game in short series. You will not be able to achieve everything right away, so develop systematically and be patient. Users can use diamonds to shorten their waiting time, but keep in mind that there is a very limited supply of diamonds. PVP is the main part of the gameplay, so you will not be able to exist peacefully here.

It is worth noting that donation flourishes in The Lord of the Rings: Rise to War. In-game store contains absolutely everything, without denying yourself anything. A bunch of all kinds of sets, a season pass, resources, loot boxes, boosters for construction, resources, pumping, in-game currency. In general, there is a strong feeling that the developers have not missed a single method of monetization. The game itself throws something to you in the process. 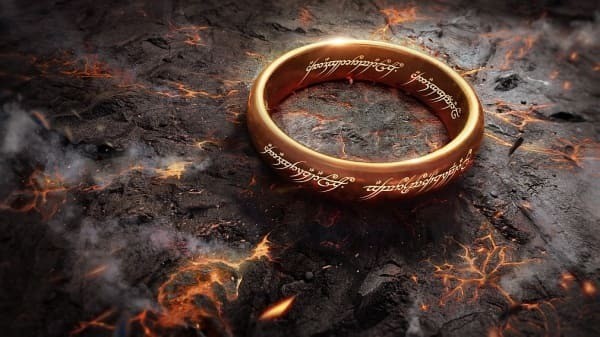 It is quite possible to farm something. However, no matter how hard you try, it is unlikely that you will be able to catch up with a player who is spending generous amounts of cash in game store in this way. This looks as inappropriate as possible in a game where success of the entire event depends on your leveling, amount of resources, speed of construction and number of combat units.

It turns out that, on the one hand, we have a magnificent game from a visual point of view, which appeals to our warm feelings associated with the repeatedly mentioned film trilogy of Peter Jackson. On the other hand, it is quite a typical representative of mobile games segment, where donation has a great influence.

The Lord of The Rings: Rise to War is an epic strategy game that all fans of the franchise will love. Some may spoil impression of the project a little by its donation component, but you need to familiarize yourself with this game.

Download The Lord of The Rings: Rise to War Mod APK