The Pirate: Plague of the Dead is an action adventure game dedicated to pirate sea battles for mobile platforms. Take on the role of Captain Jack Rackham, who commands the famous pirate ship and has voodoo magic. He is trying to resurrect famous pirates of the last century and create a gang of the most dangerous pirates. Each of the robbers has its own unique skills and features that will improve your ship and even summon the real Kraken. In addition to battles, users can engage in trade, improve their ship or a whole fleet and explore the vast expanses of seas and oceans filled with mythical creatures from ancient legends. Prepare your fleet or ship to go to the open sea, as almost endless expanses await you near the Caribbean islands. If you are interested in a similar topic, then download also Idle Tap Pirates and Pirates of the Caribbean: ToW.

Check out the main benefits of this project by reading our in-depth review.

The concept of the project comes down to the fact that you have a whole world at your disposal, full of coastal towns, harbors and islands. You will be able to move around the territory available here, performing various errands. No one restricts your movement, but at first, it is worth following a chain of tasks that teach you the basics and give rewards. By the way, the developers of The Pirate: Plague of the Dead tried to make the application as realistic as possible, so you can enjoy a change of day and night, effect of weather conditions on the sailing performance of ships and many other small moments.

The Pirate: Plague of the Dead is sure to amaze you with its versatile gameplay. It is worth noting that most of the time you will be spending on completing the story campaign. At first, it will be about training, small assignments and rather mediocre battles. After completing all the training missions, you can set off on a free float, where treasures, robberies and much more await you. All the action here takes place on the global world map, which realizes movement through conditional teleports. You already move freely on the territory of the selected location. While traveling, you need to understand that enemies can attack you at any time. An aggressor can be both a bot and a real player if you are in multiplayer mode.

You, as a pirate, have to pick up abandoned cargo, attack ships and replenish your treasury by any means. First, it is necessary to master the local combat system. You have to learn how to control not only the rudder, but also sails, cannons and even team members. Only you can choose the ammunition that will be more effective in each specific situation.

For example, it is best to shoot down sails with chain shot and destroy the weapons of enemy ship with cannonballs. Naturally, players have to purchase ammunition in The Pirate: Plague of the Dead, which smoothly leads to the local trading system. You will be able to sail to cities and trade with local merchants. Buying a product in one place and reselling it in another is your main way of guaranteed income.

Many ships to choose from

Fans of ancient ships have many opportunities – ships of 20 types made independently according to drawings, are available in the collection. Thirty different upgrades of floating equipment are currently in use. There are caravels, frigates, ships of the line, corvettes and so on in your flotilla. To build this or that ship, you need a blueprint. Repair damaged ships right between the battles. Note that one of the functions is the weekly payment for hiring a crew. Otherwise, the sailors will run away from the board and the captain’s reputation will fall. Carpenter skill opens the possibility of repairing the sides, while Boatswain skill allows you to repair the sails and Quartermaster – the cannons.

The game features three-dimensional graphics with the most clearly traced models of ships, streaks on the water, volleys of guns and much more. In addition, realism concerns the mechanics – turning of ships on the water during wind, speed of reloading guns, movement of crew and damage from hits. The sound design is not far behind, taking the user into the abyss of sea battles.

In-game currency of The Pirate: Plague of the Dead allows you to buy the best ships, shells and crew. All this costs a lot of money, so we suggest downloading a mod for unlimited amount of money for your convenience.

Initial armament of the ship in The Pirate: Plague of the Dead includes several guns along the sides with opportunity to add cannon on the bow. To capture the enemy by boarding, you need special “Corsair” skill. Installing mortars becomes possible after learning “Bombardier” ability. Use several types of shells for shooting. These are steel cores that reach opponents on long campaigns. In addition, you can use shells that have double the force of impact, but fly a shorter distance.  Chain shot purpose is to destroy sailing equipment. Buckshot is necessary for defeating work force – a ship left without a command is easy to capture. When destroying port fortifications, mortars are good, however, bombs are quite expensive for them. 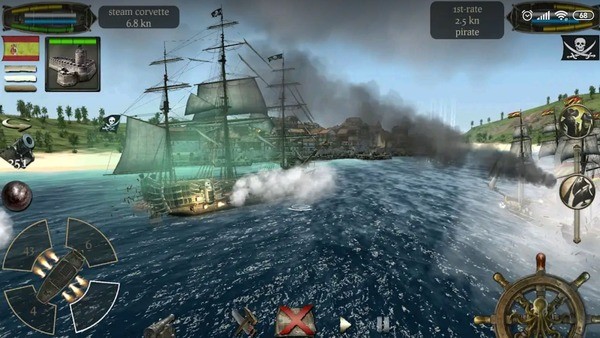 In addition to fighting, The Pirate: Plague of the Dead boasts of detailed trade operations and construction of own fort. You can transport cargo between ports, completing trade missions, guard ships on NPC assignments. Open great opportunities by studying of the world map. You can search for and raise sunken ships, hunt for pirate treasures, trade with smugglers and rob merchant ships. Do you want to join the team? Go to capture the floating slavers’ prison. It is economically profitable to transport goods between port cities. In fact, this type of earnings is the most stable, as it brings great benefits.

The Pirate: Plague of the Dead is an application that can amaze you with its realism from the first minutes. Beautiful sea views lift your spirits, trade tasks allow you to relax, plunging into a calm state, having abandoned daily worries. Well, fierce naval battles will appeal to all connoisseurs of the genre.

How to Install The Pirate: Plague of the Dead Mod?