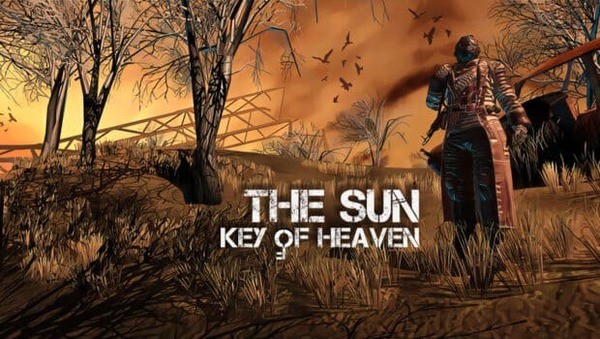 The Sun: Key of Heaven is a dark, brutal, but inventive and spectacular 3D action movie that tells the story of human civilization faced with an unexpected energy explosion that turned the Earth into a radioactive wasteland. Destroyed houses, rusted cars, frozen on highways and highways, empty houses and crippled destinies are around you. Ahead is a fog of events and unpredictable situations. The fate of protagonist depends only on those who are not afraid to take risks. Explore post-apocalyptic locations, complete tasks, upgrade your hero, find new weapons and destroy enemies. You will not be bored. Download Ice Scream 5 Friends: Mike’s Adventures and Ocean Is Home.

At the time of writing this review, the game is in the final stages of development, as some project content is not yet available. However, the data already available allows us to form a very specific opinion about The Sun: Key of Heaven.

The atmosphere of post-apocalyptic world

Learn the story of action game from AGaming with help of the main character’s notes, collected in the diary, through dialogues, magazines and newspaper clippings. Although formally the topic of nuclear bombs, radiation and apocalypses has long been exhausted, it is impossible to get bored in The Sun: Key of Heaven. The strange and even scary situation surrounds, as if makes you grip the rifle more tightly in your hands and peer into the horizon harder, hoping to detect an ambush before the enemy.

In terms of atmosphere, the action is able to give a head start to its competitors in face of its computer counterparts. Rusty AK-47, dirty bottled water, yellow and long-term non-sterile bandages, destroyed buildings and mutants. Watching the life of virtual characters lost between radiation and dangerous opponents is an unforgettable pleasure. It becomes easier to believe in virtual life with every new minute.

Quests are another interesting feature of The Sun: Key of Heaven. They are often not only interesting, but also non-linear. You will not find classic “kill 10 mutants” or “collect 5 desert herbs” here. At the very beginning, you meet your mentor Zhdun, who will give you the first quest. He asks to find the killer of his father and there are several ways for this. You can collect rumors in a nearby village or talk with hunters or hermits to find out the truth. If you want, then enter into the confidence of the bandits and ask them yourself. Alternatively, you can come up with some other scenario. This is the situation in many quests. Globally, there are three large quest branches in the application. They do not intersect with each other in any way. You can pass them in parallel or just one after the other.

The game world of The Sun: Key of Heaven is divided into several locations. Initially, you are in the Oasis – a place that has more or less survived with some semblance of normal life. However, there are enough bandits and murderers here too. Wasteland dwellers are a separate layer of the surviving population who periodically assign tasks to the character. It is necessary to clear the area of zombies, find a missing person or object. In some cases, you can bargain with them.

There are special zones on the map to avoid – places of biological and chemical waste, areas and fields contaminated with radiation. If the hero accidentally fell into a similar trap, the only way to escape is to drink alcohol or take medicine. In a skirmish, the hero can receive serious injuries. It is important for him to drink in addition to alcohol for treating wounds in order to quench his thirst.

As for the gameplay of The Sun: Key of Heaven: everything that the hero uses in the process is in different places – backpack, pockets and compartments of equipment or in belt. You can walk simultaneously with a grenade, a knife, a detector with a bulletproof vest and helmet. By pressing the buttons on the panel, which are located on the belt, you can use the five necessary items. There are also special slots: artifacts that significantly increase the level and characteristics of the hero. It is worth remembering about the weight limit – if you significantly exceed it, the character will run too slowly, which can play a cruel joke.

Graphic component is the strong point of The Sun: Key of Heaven. Developers managed to create a post-apocalyptic atmosphere that is comparable only to Fallout and other games of this genre. The game has a change of day and night, but with its own characteristics. At the same time, the application is quite demanding on the device resources. If you have any difficulties, try lowering the graphics quality in the settings.

Download mod menu for The Sun: Key of Heaven, where the user can activate infinite money, immortality, infinite stamina and infinite ammo.

After launching the application, you will see a button in upper left corner of the screen. Click on it and enable one of the cheats. At any time during the game, you can turn it off if you suddenly become uninteresting to play with mod.

Mutants, hostile people, packs of angry and hungry animals – all this awaits you in the wastelands with practically no food and drink. Obtain weapons on your own and be ready to attacks every minute. Such a project will interest many avid fans of shooter or just connoisseurs of shooters. A cloud of radiation, formed on the surface of the Sun, reached the planet Earth, bringing with it devastation and hunger, death and danger. Survival is the only desire of humanity that managed to hide in a bunker. One of the lucky ones was the main character of the game.

The Sun: Key of Heaven is a post-apocalyptic shooter with a cool plot. The gameplay is a bit similar to the favorite S.T.A.L.K.E.R. – one active hero and a state of complete collapse all around. Meet crafting systems periodically encountered in the game. Main character, getting into habitable zones, sometimes finds vital elements: maps, instructions and schemes for assembling necessary items for passing to the next stage. These items (for example, a workbench) are strategically important, because you can create a weapon for self-defense or element of everyday life, without which you cannot build a new home.

The Sun: Key of Heaven is perfect for fans of the Fallout series or S.T.A.L.K.E.R. The setting and basic idea of ​​this project is very similar to their older brothers. If you love to explore, complete missions and shoot enemies, then this app is a great choice.