The Walking Dead: Survivors is an addictive strategy game from the developers of Galaxy Play Technology Limited, where you will experience a truly harsh life full of challenges and battles. Develop your camp from scratch to resist not only monsters, but also evil people. As in any zombie strategy, the player has to survive. Prepare for endless battles, extraction of food, resources, materials, tools and construction of protective shelter bases. You can play alone or in cooperation with other users. The developers have made dozens of plot tasks (about 80), some of them reproduce the iconic moments of the prototype series. For example, you can get companions in the person of Negan with the entire Saviors gang. We also recommend paying attention to World Conqueror 4 and Botworld Adventure.

Join over 5 million Play Market users who have already installed The Walking Dead: Survivors. Start your confrontation with the harsh world of the zombie apocalypse era.

Gather a team and try to survive

The heroes of the story are desperately trying to survive, making their way through a horde of zombies on an old school bus. Unfortunately, it rolls over and breaks down in a bad place. The people find themselves near an abandoned house, but the dead are already on the way. Someone controls himself, while others scream in horror. However, the girl captain takes everything into her own hands, assuring her comrades that they will definitely survive and destroy the dead. 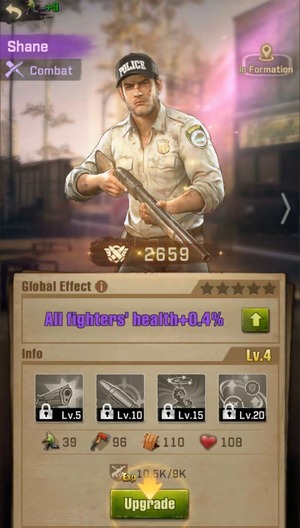 Taking a defensive position, everyone fires back. One of the comrades notes that if do not climb higher, then everyone will die. Then a stranger suddenly appears – it is you. Your task is to cope with the first offensive. Your team will only grow every day. Each newcomer has own sad story.

From the name of the application alone, you can already understand which series it was based on. The Walking Dead: Survivors allows you to meet your favorite characters, who are not only depicted on the game cover, but also take a direct part in life of your refuge. The gameplay here is similar to original storyline, within which you need to solve problems of a very different nature. First, you need to understand that the main enemies of humankind in this game are not zombies. Survivors are ready to go to great lengths to get resources and provisions, so you will have to fight constantly with bandits and squads of other users.

Many characters in the game are already familiar from the comics and TV show. These are Glenn, Hershel, Michonne, Maggie, Rick Grimes, Maya, Mike, Wayne, Beth and others. The roster constantly gets new updates. Some heroes come on their own, while others require rescuing by tracking down the distress signals. To search for heroes, the player needs to go to the rear radio stations to scan the broadcast regularly. After finding a call for help, it is necessary to send raider squad to the indicated place.

Build a base and fight back zombies

Please note that The Walking Dead: Survivors is an online strategy game that boasts an impressive number of unusual mechanics. This led to a large number of sub-modes. The most important component of the gameplay here is the construction of the base. Enjoy a decent-sized territory where you can build a variety of buildings necessary for survival. 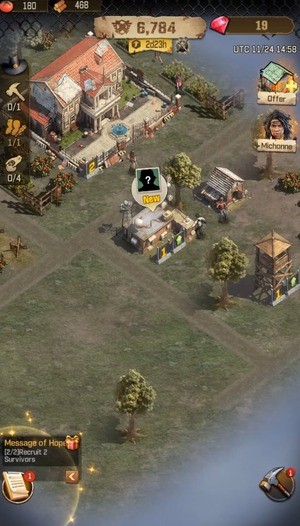 Each building here is responsible for a specific area of ​​the settlement’s life. You need to establish production of resources, field of medicine, research laboratories, military buildings and much more. The most interesting thing is that before building, you need to free the territory from hordes of enemies. Do this gradually, since it will not work to kill all the zombies right away.

Here you will come across high-quality graphics, elaborate animations and large-scale battles, so the game is quite demanding on the hardware of the gaming device. That is why you need a powerful device, because the optimization in the application still has some problems.

We bring to your attention The Walking Dead: Survivors mod, which allows you to activate god mode and kill all enemies with one hit. To activate the mod, you need to open a special mod menu and select the parameter you need there. Please note that the mod only works in single player mode! It will not function in multiplayer.

The areas of The Walking Dead: Survivors map open gradually as you visit them. The opening cutscene shows several survivors shooting back from many dead. Next, Maya and Wayne appear, heading by bus to the town of Gard Springs. The transport turns over and the heroes take up defensive positions on the nearby towers. To place a character in a specific place, drag him there with a swipe. Glenn, who got to the location with his reconnaissance group from Alexandria on a distress signal, joins the fighters. This is how the game begins. 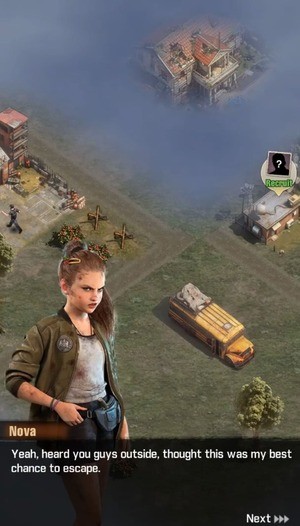 The fighting in The Walking Dead: Survivors takes place both on the settlement map and on the global world map. Hordes of zombies and various bandits periodically attack your settlement. You need to acquire a combat-ready squad in the shortest possible time and repulse your enemies. Find all kinds of neutral buildings, squads of neutral creatures and settlements of other gamers on the global map of the world. Each enemy squad shows its level, so you can always orient yourself regarding the next target to attack.

Heroes will become the backbone of your army. They are divided according to the degree of rarity, role in the battle and many other characteristics. If you want to maximize the effectiveness of the hero, then you should attach him to some squad. In this case, you can send a detachment on a campaign to engage in the extraction of resources or destruction of enemies. The pumping of characters takes place directly in the battle itself. Naturally, there are bonus items that help to pump characters, but there are not so many of them.

Often gamers meet new story survivors on the way to their destination. They further increase the functionality of the settlement and improve protection. Each of the found characters has its own abilities expressed in an increase of extracted resources or combat power. If you improve the abilities, then the bonuses of characters will increase.

This game is perfect for those who love strategy, but do not particularly want to strain too much. Everything here is thought out so that you have a great leisure time, so hurry up to download The Walking Dead: Survivors. Thanks to a rapid development, you can achieve significant results in a short time period by pumping your base.

How to Install The Walking Dead: Survivors Mod?