The Walking Zombie 2 is a great blend of RPG and first-person shooter that tells you the story of Chosen One surviving in zombie-infested world. Here you can really fight for your life, because your opponents are not only the maddened infected, but also other survivors. In order to repel attacks of undead and bounty hunters, will have to acquire a powerful arsenal and vehicle. Use different types of weapons to cope with huge bosses and manually destroy smaller zombies. Don’t forget about edged weapons, which can help you save ammo. You also have to make ammunition and get the main items of equipment yourself. Go on raids and find surviving tools, consumables and ammunition. If you like shooters, download MilkChoco and Hit Master 3D: Knife Assassin.

The Walking Zombie 2 release was over a year ago, but millions of gamers are still enjoying the project.

Experience an atmosphere of overwhelming terror

The Walking Zombie 2 contains an exciting plot that unfolds as you complete tasks, level up and get acquainted with in-game characters. The central figure is main character, who is lucky to become the owner of immunity to zombie virus. On his twentieth birthday, the protagonist realized that he just needed to try to save humanity from infection. Right from that moment your long and difficult path begins. Crowds of zombies are waiting for you around every corner. Throughout the game, you can feel atmosphere of fear and even despair soars around the hero. However, he can overcome all difficulties with your skillful control.

Important gameplay component of The Walking Zombie 2 is pumping the protagonist. For experience gained for completing tasks, you can improve characteristics of main character and upgrade his skills. Represented stats here include classic strength, agility, health and so on. There also passive skills that can help you to progress through the game. Level up mastery of shooting, using lockpicks, finding more resources in crates, speaking eloquently with merchants, and more. This game allows you to create a unique character who can have the most important survival skills.

The Walking Zombie 2 features different types of zombies. Some of them are vulnerable to various incendiary mixtures, while others do not tolerate poisons and acids, and third are possible for killing only with help of armor-piercing ammunition due to its invulnerability. Not all mutants move on two limbs on the surface, so you may encounter flying creatures, as well as earthworms that have turned into Shai-Hulud. These are the most dangerous creatures that can appear anywhere on the map and easily eat a person. So be careful!

One of the decisive factors in popularity The Walking Zombie 2 is amazing graphics. Cartoonish and low-poly visuals pleasantly surprised the players, while complemented physics worked out to the smallest detail brought the project even more popularity. In-game sounds only create additional atmosphere – screams and roars of zombies can scare even sophisticated users.

We bring to your attention modified The Walking Zombie 2, where you can have access to unlimited skill points, as well as free purchases for real money. In addition, it features special mod menu where you can activate cheats for immortality, high damage and endless ammo.

Our team has checked The Walking Zombie 2 mod. All of the above functions function perfectly. Please note that you should not buy too much gold and silver to purchase free purchases with real money. Otherwise, developers can ban your account. In order to activate the mod menu, click on the special icon the upper left corner of the screen. It is possible to turn on/off functions of immortality, damage and unlimited ammo at any time during the game. 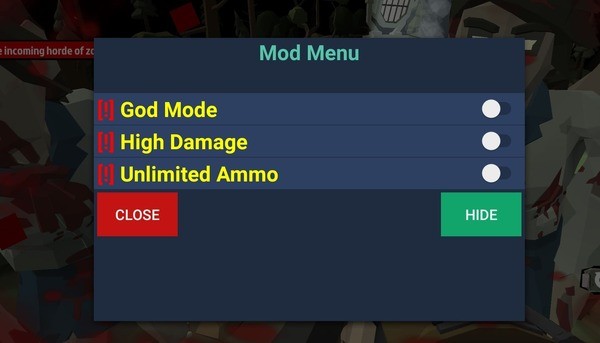 Developers of The Walking Zombie 2 have introduced RPG elements into their project, so over time you can increase level of not only the main character, but also his weapons and ammunition. Opponents also evolve and become more dangerous from mission to mission. If at first you come across simple zombies possible for destroying with nails tied bat, then in the future you need something more powerful. Collect whatever materials you can find in the wasteland and create a good sawn-off shotgun. In addition, you can easily purchase equipment and everything you need from merchants, if you have money.

During the playthrough, you come across dozens of survivors, who are also lucky. In order to acquire allies and friends, you have to help them and complete various tasks, which also differ in complexity. In order to have any effect for this, the developers have implemented a very interesting karma system. Relations with certain NPCs worsen or improve depending on your actions and choices during dialogues. Therefore, over time, you can acquire your own squad to defend your base in The Walking Zombie 2 or help you during wasteland exploration.

The Walking Zombie 2 project deserves your attention, especially if you love zombie and survival games. An open world, many different enemies, weapons and a lot of fun – all this awaits you in this exciting game.

How to install The Walking Zombie 2 Mod?

Don’t forget to delete original The Walking Zombie 2 before installing our modified version to prevent errors during installation process.