The Wolf – this game offers you a unique opportunity to plunge into the life of a harsh and fearless wild animal. Fight for its life every day, facing deadly challenges. Wolf is one of the most strong-willed creatures that even more ferocious and powerful opponents cannot cope with. Project itself is an excellent multiplayer wolf simulator where you have to wander around a huge world and survive in the most difficult conditions. You can do this both alone and together with your friends, thanks to the cooperative game. Separately, we have to say about the presence of deep pumping of the protagonist, which affects his skills and physical characteristics. Create flocks, explore other people’s locations, fight, invite other animals to your team – possibilities are very diverse. Also, download CATS & SOUP and Forest Island.

This simulator is quite a high-quality game, and more than ten million users have already installed this application on their Android devices. However, what exactly does this game offer? We will find out now. 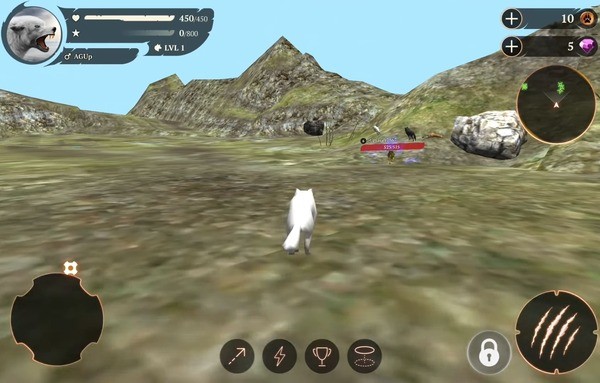 The Wolf begins with the need to create your character. After creating your wolf, you need to choose the territory where the predator will hunt. There are 4 of them: green hills, dark forest, wild tundra and legendary mountains. Only green hills are available to a beginner, other locations open upon reaching a certain level. When loading the game world, the player has to send his animal to hunt and start earning experience. After loading the location, the user finds himself in a relatively open world. There are no clear rules or even simple recommendations on where to follow. Everything comes down to the will of the player.

Fight for loot with other players

The Wolf offers only two game modes and both are online. The first game mode called CO-OP Hunting, as you simply hunt other animals along with other wolves, i.e. players. Everything is trite here – usual PvE. Once your health is low, you need to exit the battle mode and wait 30 seconds. Then, it will start to regenerate. Receive not only experience, but also items necessary for pumping characteristics and skills after killing other animals. Another arena in the game is also available – PvP Arena. This time, all players are divided into two teams and fight against each other. Although there are quite strong animals in these locations. However, players can earn a lot more experience and items. Fight and pump your wolf.

At the start of the game, you need to distribute the characteristics for your wolf. There are four of them: health, attack, defense and running speed. When completing The Wolf, the user earns game points indicated by a round paw icon. Earn them for killing victims, as different animals bring different number of points. You can spend the earned points on wolf development. With each increase in the skill, the price for the subsequent pumping will be higher. In addition, with the receipt of experience, the player can pump skills also divided into 4 categories: basic, auras, special and totems. There is a grid of improvements in each category. You cannot pump any skill from the existing ones, so develop gradually. These skills can greatly facilitate the gameplay. however, to unlock them you need crystals – an expensive in-game currency.

The Wolf is an open-world game that is, however, not very full. There are different forms of relief: mountains, hills and plains, as well as streams and lakes. In addition, some locations are full of vegetation. The animal models are great, while graphics keep up with other similar simulators. Moreover, it is possible to change some of its issues in the game settings to improve performance. The game also features musical accompaniment both in the main menu and during the game. You will not hear a melody, but sounds of crickets and a wolf howl, which allows them to feel the atmosphere.

We bring to your attention a mod that allows you to make any purchases, even if you do not have enough money. Please note that the mod does not work online!

Before playing, you need to create a wolf and choose its color. Then you will immediately find yourself in the wild. Look for weaker animals and attack them, thereby increasing the level of the wolf and giving points for pumping attack, health, defense and speed. It is better not to walk on large animals alone, because your wolf may fail and die in this fight. In addition to hunting alone or in a group, which allows you to explore the world around you in search of loot, there is a battle arena mode where you can show your strength in battles with other players. The Wolf is primarily for those who like animal simulators for Android.

Try to create your own unique playable character in The Wolf with all the qualities of a pack leader. Perhaps this is exactly what you will do best.