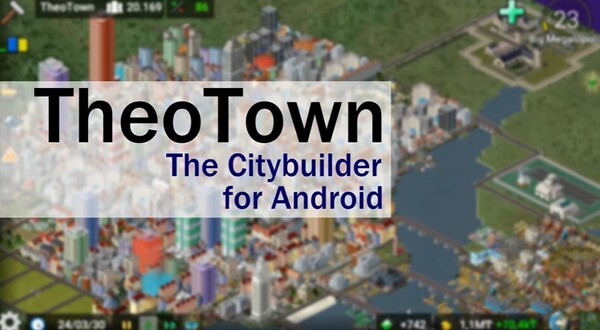 TheoTown is a city-building simulator with isometric graphics ported from PC straight to smartphones. However, unlike the mobile version, the game has undergone many improvements and global changes. For example, the graphics and game engine received significant updates. Developers removed all internal purchases for real money to remake the balance. There is also a new interface and full-fledged mouse control. Otherwise, it is still the same elaborate and detailed simulator of city management and construction. The player needs to build buildings for various purposes, communications, open jobs, build roads, erect statues, skyscrapers, and much more. For lovers of strategy and simulators, we can also offer From Zero to Hero: Idle Life and Ultimate Tiger Simulator 2.

You can play “farm game” for 10 minutes – collect all the resources, complete a couple of tasks, put another expensive house under construction and return in a day, because there is nothing else to do in it. TheoTown is a classic simulator – the gameplay will not change while you are away. Therefore, you can spend several hours in it without interruption and there will always be something to do.

Let’s make a reservation right away in defense of TheoTown – it’s still a free game. For example, there are three game speed modes. The fastest of them are available for crystals or you can watch a small commercial for this. Diamonds are a local premium currency that you can save for achievements or buy with real money. Double acceleration is enough for me, so there is no point in collecting crystals for this. 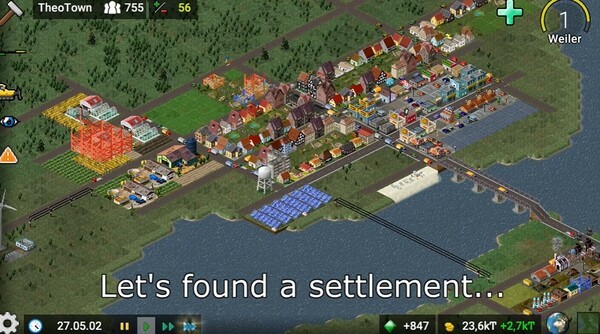 The rest of TheoTown’s gameplay will be familiar to those who have played SimCity or any other city planner simulator. First, you need to create a region – choose the size, shape and characteristics of the map. Each region has several sectors – build a separate city in each of them and then connect together by rail or air.

Cities are built according to a simple scheme – you need to arrange residential, commercial and industrial zones. Do distribution of districts wisely. Industrial zone should not stand next to residential buildings, because then people will complain about poor ecology and noise. At the same time, it is necessary to connect everything with roads correctly so that people could not stuck in traffic jams on their way to work and back.

Initial stages of TheoTown require supplying of each district with electricity (build some kind of power plant and grids). Don’t forget to provide water supply (put a pumping station and pipes). Then you need to think about the sewage system, landfill, cemeteries and other important things.

TheoTown not only proposes to develop and scale the city, but also to ensure that residents feel good. To do this, you have to take into account the demand and build new housing or production zones on time so that everyone has a job. At the same time, all life support systems should work in the city. Police, firefighters, medicine, electricity, water, entertainment and everything else.

As the city develops, its status changes – a settlement, a village, a suburb and so on. You can develop almost to infinity, up to the status of “universe” and “huge infinity.” With each new stage, more and more parameters and buildings for construction appear in TheoTown. You need to manage to build new districts and keep track of everything else. If you did not provided city with fire services in time then sooner or later a fire will start in one of the districts with no one to extinguish it. Moreover, people can come out to a rally because of a large dump nearby, 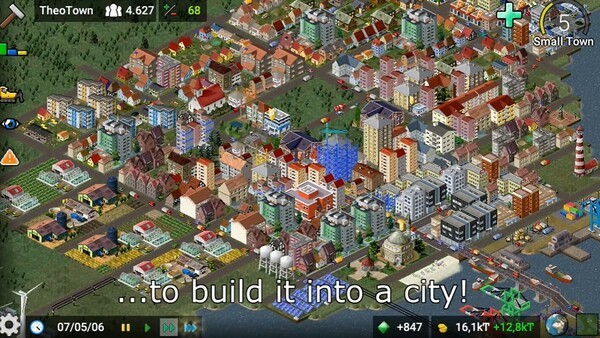 If you want to speed up the pace of the game or buy unique structures to decorate your city, then you need diamonds. Unfortunately, this in-game currency is paid, so many players never reveal the full potential of their city-planning ideas. However, we can suggest you download TheoTown Mod APK, which gives you access to Unlimited Diamonds. Remember one rule. If you want diamonds, just press on the volume button and receive riches instead.

In the first 5 minutes of playing TheoTown, it was difficult for us to figure out how to settle citizens in our city. The road to the end of the map didn’t help. The police station, fire station, pharmacy, solar panels, as well as a water tower – all the conditions for settlement too.

We have allocated land for commercial buildings and residential, but so far we did not want to pollute the atmosphere by selling plots for an industrial zone. At first, poor people who decided to move to a small settlement with low taxes will populate the city. In our case, initially the tax on all zones was 9%.

Meanwhile, expenditures did not fall too much and the population did not grow steadily. Ultimately, the $ 50,000 that all TheoTown players get at the start immediately disappeared. In the absence of money, we were no longer able to conduct electricity and pipes. New residential buildings lost electricity and water. The solution was to raise taxes. However, for income growth it was required to raise taxes in all zones to 16%.

This led, unfortunately, to a rapid outflow of the population – people continued to leave the city, but there was no profit from taxes. At this point, we decided to end the game, as development of the city became impossible.

TheoTown is a real city building simulator. Become the mayor of the city and turn it into a real metropolis. Engage in construction and build large, modern buildings and structures. Think about your citizens, how they will live, move around and so on. Make the settlement entrusted to you ergonomic and comfortable for life. Retro shade, wonderful graphics and nice picture – enjoy the process. You can diversify the architecture of your city with the help of well-known attractions. If you take care of your people and they are happy, then you will become the best mayor in the world.