This is the President is a global strategy game with an interesting plot and a huge amount of text. Your story begins with a cell in one of the US prisons, where a certain prisoner is trying to persuade a guard to help him get out of prison and change the current government. By some happy circumstances, he manages to take the presidency of the United States. First, you need to make certain promises, present your policy to the public and tell about future changes during your reign. Everything will depend only on your actions… If you are into strategy, then download Age of KITA and Transit King Tycoon.

Prepare a speech to voters, discuss future plans and goals in This Is the President. There are four years of presidential term ahead, which you have to spend in the best possible way. In addition, do not forget that you need to fulfill the promises you make. Otherwise, you will not be able to stay at the head of state for a long time. 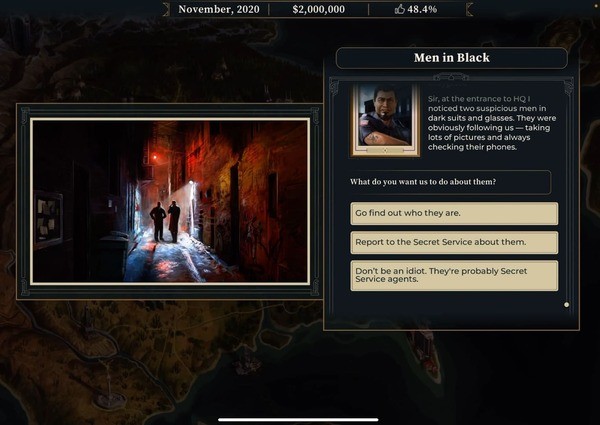 One turn in This Is the President equals one month of the presidency. During this time, many events take place. Somewhere you need to make a speech. Somewhere to send employees to complete the task. Starting from the second year of governing the country, international politics will also demand attention.

A mistake in a decision can be very costly – from reputational losses to complete failure, expressed in the loss of a loyal ally in the Senate, which is very important when it comes to voting for your initiatives. This is the whole point of the game. Decisions and their consequences.

Enlist the support of a team of professionals

Do not think that you have to carry the burden of government alone. To achieve very important goals in This Is the President, you have team that you can expand in the future. Your headquarters focus on fulfilling tasks in four areas: society and media, IT and information security, advocacy and lawmaking, security and law enforcement.

Make decisions, following the advice and consultations of your staff members. For example, a task appears to convict a congressional representative of a bribe, allowing you to exclude him from a race and help an old acquaintance who seeks to keep senatorial seat. You can choose up to two assistants for this. They will give you a few tips, each in their own area, that will help or not help you solve the problem. 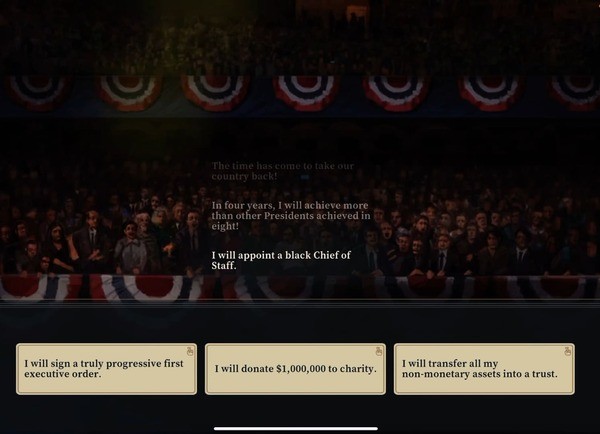 Lots of humor and satire

Let This is the President refer to strategic managers, but it is the textual descriptions and dialogues that attract attention to themselves, full of ridicule about what is happening in the world right now. The whole game is a big political joke about news, social networks and blogs. Everything is ridiculed: rights of minorities, social inequality, craving for power and wealth, major political events, specific personalities, class struggle, crime, culture, science and technology.

Screenwriters enjoyed complete freedom of action. There is a lot of text, and you should read it carefully, otherwise you risk making the wrong decision at the most crucial moment.

It is unlikely that fans of such games will strongly appreciate the graphic component, because here the emphasis is more on the mechanics. The whole process focuses on various dialogues, video inserts and you just have to make the right decisions and try to stick to your plan.

Let’s start with the fact that This Is the President is a paid game according to official sources. It costs about three dollars. We offer you to download it for free using the link below. 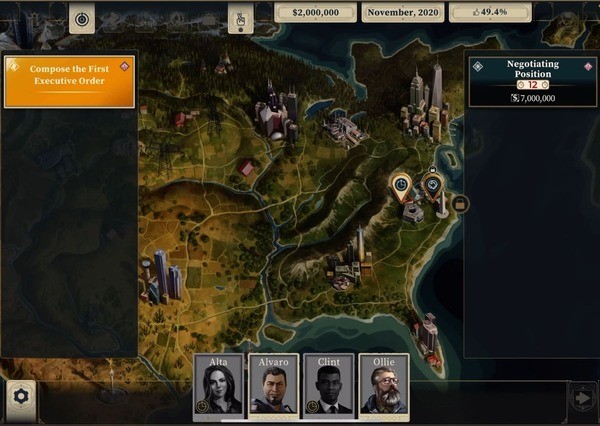 This Is the President has a huge amount of text, information and dialogues, which are still better to read in full so that your reign lasts as long as possible. To be precise, there are 4 years to rewrite the constitution. However, not everything is as simple as it seems. After all, players have to convince Congress, ordinary American residents, court and fulfill many other conditions. In addition, any of your actions in the game leads to certain consequences and not necessarily positive ones.

Pay special attention to the fact that your rating is not the most important thing in the game. After all, current president of the country needs to manage finances competently. For example, spend money on various needs of the country’s inhabitants. Donate to various charitable foundations and much more. In addition, in order to fulfill its main task (rewrite the constitution), it is necessary to reach a certain circle of people. A person who is ready to help in this asks to pay him as much as seven million dollars in a short period.

During your reign, you need to recruit your own team, where each person would perform a specific task. For example, you can appoint a former head of the FBI as head of security. In addition to your main tasks, you will be able to give them various assignments that will not be part of their duties. Each subordinate has the opportunity to perform only certain tasks.

This Is the President is a good visual novel with role-playing elements and a simulation of the president’s life. If you are interested in politics, then you will definitely like this project.