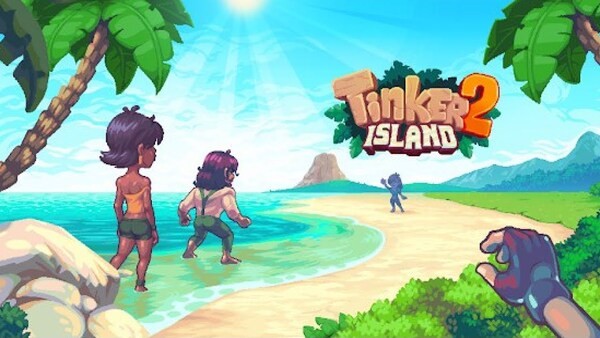 Tinker Island 2 is an adventure game from the developers of Tricky Tribe. Three survivors of the shipwreck people (two girls and a boy) find themselves on the island coast. Now they must survive to await help from the mainland. You, as the leader of this group, have to make many decisions in order to survive. Explore the surrounding area and look for useful resources. Using these materials, equip the camp and create items that can help you fight monsters and wild animals. In the future, you will find other survivors to join your group. By joint efforts, you will be able to unravel the mystery of this island. The application offers a large open world made in pixel art. If you are interested in adventure games, we also recommend downloading Hotel Frenzy and Beggar Life.

Tinker Island 2 is a sequel to the first installment with millions of download over the world. The new project promises to be equally successful.

Tinker Island 2 focuses on desert island survival. The developer gives you three survivors who perform all sorts of tasks, recruit a new team, collect resources and build structures that allow you to live more comfortably on the island. It is worth noting that the main task of the survivors is to explore the island – after all, there may be a port or a city with people on the other side. However, the team will not immediately make their way through forests and mountains, and this is quite logical. You have no supplies and no shelter, so you do not know the dangers of the island.

Therefore, first you need to equip your home, gain resources, and then gradually explore the entire island. An interesting system of dialogues is also worth noting. The answers to questions determine the further development of the storyline. For example, the hero can agree with his companion and go to explore a certain area of ​​the island, having stumbled upon a predatory animal there. Alternatively, he may not go there, thereby protecting himself.

Each character in Tinker Island 2 has four main skills – exploration, gathering, crafting and attack. These skills affect how effectively he will engage in certain activities. Upgrade skills by erecting certain buildings, equipping a tool or weapon, and devouring special pearls.

Characters also have vitality indicators. It can be lost suddenly and completely only in a random event during research, or being inattentive in battle. With zero health, the hero goes on a long 20-hour rest. If you want to speed up this process, you will have to watch many ads.

As you progress through the story campaign of Tinker Island 2, the protagonist learns that this island has some inhabitants. There are villagers, townspeople and aliens. The plot of the application is built in such a way that you have to choose one of the parties and join it. The character can help a certain faction to complete quests, and in return receive a generous reward.

If we talk more about the mechanics of gameplay, then it is possible to progress in the game by exploring new territories. Each location has two stages: research and resource search. First, you spend food and send people to the location, covering the necessary intelligence points. In the process of research, your journal fills up, and the game gently moves you through the plot, offering you to make certain choices or play text mini-games. When the research is completed, the second stage opens and a new location.

Tinker Island 2 features pixel graphics, so the game resembles applications on eight or sixteen bit consoles. However, we cannot say the same about shortcomings of the project, rather the opposite – this style gives the application its own unique charm. The game also has music and soundtrack, but it can bother the user. In this case, you can easily turn it off.

In-game currency is required to improve buildings, craft and advance through the story of the application. Unfortunately, there is very little of it in the game, which is why many users have to donate. However, it is possible to solve this problem by downloading the mod for free shopping. You can buy things even if you don’t have enough money. In addition, Tinker Island 2 mod includes free real-money shopping options.

The plot of Tinker Island 2 is trivial. The wreck, the island, the unknown – everything is classic. All progress in the game revolves around the plot, neither the characters nor the settlement have any “levels”. The player finds himself on a black island, in which only a tiny part is open, thereby setting a global goal – to explore the entire island.

Sometimes you have to fight while exploring. Meeting with the enemy blocks further exploration of the location. The battle is simple: all characters are against one enemy. Everyone has damage and vitality. The enemy deals damage to everyone at once. Each turn you need to tap the screen in time when the attack strip is on the green section of the strip. If you hit it in time, you will cause more damage. The situation is similar with blocking strikes. The better you do it, the less damage characters receive. The defeated enemy removes the block from the location and rewards the player with premium currency.

During research, you may get items in your inventory that need to be processed in order to get resources. Sharpen a stone, cut a pig, break off branches, and so on. Sometimes even items will appear there to get premium currency. Processing takes place in terms of time and points – there is no need to spend additional resources on it. Your crafted potions and tools go there too. The tools and weapons that you craft give a bonus to the character’s skills.

Tinker Island 2 will appeal to many adventurers. There are very interesting dialogues between the characters and very important records of the exploration of the island. It is always interesting to discover new lands, because you never know what awaits there. The game has no age restrictions, so everyone can familiarize with it.