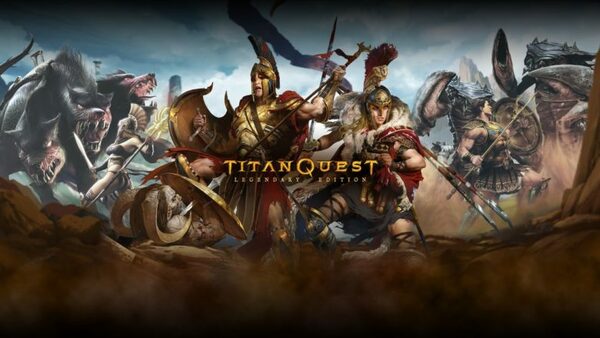 Titan Quest: Legendary Edition is a game that can definitely please both players familiar with cult series and newcomers. It can offer a mesmerizing fantasy world filled with various details, high-quality combat and role-playing system, as well as an exciting plot. In-game world lives its own life and all people have their own problems. Get an opportunity to help many interesting characters by completing their quests. Construct better equipment and acquire new deadly skills. Titan Quest combines the best of action RPG genre, as it immerses the player in ancient worlds of Greece, Babylon, China and Egypt. Exploration of untouched lands of Northern Europe and search for legendary Atlantis will not let you get bored. In addition, victory over terrifying mythical creatures can provide you with incomparable pleasure. If you like RPG projects, then check out Dragon Quest and Royal Knight.

The game has several features that distinguish it favorably against the background of other similar projects. Let us consider them in more detail.

Territories of ancient world in Titan Quest: Legendary Edition are in danger. While clearing them of threat, main character has to reveal various secrets that can help him in the decisive battle. Providing help to those who need it, you definitely can plunge into any intriguing story. The main thing is not to distract on side quests fully and not to forget your main mission, because the largest Titans do not sleep and become more and more dangerous every day!

Convenient navigation in Titan Quest world cannot allow the player to miss a task or mistaken in desired merchant or artisan. Developers planned all cities in such a way that it is difficult to get confused, as you can easily find most of the necessary places intuitively. Controls, as indicated in pre-release announcement, have been adapted for both smartphone touchpad and gamepad. At first, it is difficult to understand touchpad controls. However, after playing for a short amount of time, you come to harmony with all located elements.

Major DLCs are already included in Titan Quest: Legendary Edition and they greatly expand the game world! Immortal Throne presents players with many new quests and dangerous opponents from Greek mythology. New adventure stands out for the fact that you have to fight arisen danger side by side with Achilles and Agamemnon! Ragnarök and Atlantis also present new worlds and exciting new stories with many different secrets for the protagonist to uncover!

Graphical component of Titan Quest: Legendary Edition perfectly shows the splendor of the ancient world. Various effects add freshness to battles with enemy. Background sounds and music fit perfectly into game atmosphere. Therefore, we highly recommend to play only with headphones to get a wider range of emotions.

To begin with, Titan Quest: Legendary Edition is a paid game in official sources. Now, its cost is about $20. Our mod completely disables license verification, banners and all kinds of advertising, so that players could fully enjoy the game process. In addition, it is possible to get an unlimited amount of money and all the additional content currently available.

Our team tested Titan Quest: Legendary Edition. After downloading the presented version, you can play the game free. In addition, mod provides players with opportunity to get unlimited money. We also made sure to delete all ads from the gameplay process. You just need to download the game and install it on your gadget. Do it by following our simple instructions and enjoy the unlocked gameplay.

The gameplay has incorporated everything that RPG games feature. Namely, roleplaying of main character in terms of different classes and variety of equipment with unique characteristics. A huge number of development branches allow you to see exactly the character you want, whether he is a classic enforcer, a dexterous archer or secretive killer.

Quests in differ from standard for a similar genre “give-and-bring” style and have its own story, which you want to believe and listen. Initially simple task can turn into a challenge! Well-thought-out balance also pleases. It doesn’t allow players to become omnipotent immediately. At the same time, it is not necessary to involve in eternal pursuit of items with higher characteristics.

Many gamers around the world have been waiting for this game and the developers have fully met their expectations. Titan Quest: Legendary Edition is worth playing even for a player who is far from Greek mythology and RPG games in general. Everyone can find here something special, whether it be addictive gameplay or exciting plot.

How to Install Titan Quest Mod?