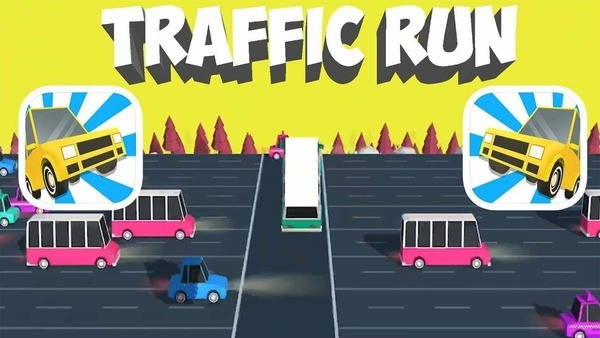 Traffic Run! is a unique arcade game that makes you feel like a driver in heavy traffic conditions. The project invites all players not to delve too deeply into the topic of detailed vehicle tuning, but to choose a car model and plunge into very addictive gameplay. This project belongs to arcade genre, since here you need all your speed of thinking and reaction. Traffic Run! forces the user to turn on brains in order to solve one simple task – to get to the finish line safe. You are driving a vehicle that must overcome city streets full of other cars. Try to complete the main mode, which includes hundreds of levels that are not as easy as you think. Our team has prepared for you other interesting racing projects, such as Need for Speed ​​No Limits and Parking Jam 3D.

Traffic Run! is a simple and straightforward game. Nevertheless, it is very popular among users. Learn all its features from our detailed review.

Traffic Run! story campaign consists of several hundred independent levels. All of them pursue one goal – reach the finish line. If you think that fun colors and drawn cars cannot make it difficult to walk through, then you are wrong. Cars ride fast enough, so beware of its appearance. It is helpful to know that some cars travel at varying speeds, so you need to keep your distance. In later levels, you discover trains that rush with wind speed. Special traffic lights warn of its appearance, beginning to ring loudly and flashing red when the train is close. The developers also took into account landscape and environment.

Feel the atmosphere of a busy highway

Traffic Run! visually shows you the life of a driver in a fantasy world where no one knows about road rules. The game itself is a funny arcade game. Make your way through busy sections of the road with tons of obstacles in form of vehicles.

First, you drive through the suburbs. There is no busy traffic, and you can simply slip along the road. However, such levels end quickly. Just adjust to traffic, plan your movement in advance so as not to get stuck in traffic and also maneuver. Over time, you come across buses, trains, vans and other integral parts of a busy highway.

The project captivated users with its simplicity and original idea. There are many games with similar gameplay, but only Traffic Run! was able to interest more than ten million gamers around the world. First, it became possible due to the simplest controls. You just need to push only one button here, which instantly sets your car in motion. If you want to stop, just release the button. It is important to note that your car chooses the road at intersections automatically. You don’t need to turn on your own. Intuitive controls, easy navigation and localization into several languages ​​- all this can help you quickly adapt the gameplay.

It is worth noting immediately the excellent visual design of Traffic Run!. During game creation, the developers used bright and vivid colors that favorably affected the overall atmosphere. The soundtrack sets the player in a naughty and cheerful mood. For those who suffer from a lack of free time, this game can become a real treasure. The walkthrough of each level takes no more than a minute, which gives you the opportunity to exit the game at any time.

We bring to your attention a mod for unlimited money and all unlocked cars. Follow our instructions below to install it properly.

Our team checked Traffic Run! and made own conclusion on the game. Indeed, after installing the mod, players immediately get unlimited amount of money on game account. Moreover, our solution allows players to unlock all the cars and choose the best skin for it. We confirm that installation file contains no viruses and cannot degrade the performance of Android device.

Each stage of Traffic Run! assumes its own unique location. Not only the track changes, but also the surrounding view. You have to visit snow-covered locations, desert, ride within the city and so on. The later stages are not flat road sections, but a collection of intersections, forks, railroad tracks and other integral parts of any highway.

The developers tried their best and created many car models, which has a positive effect on overall atmosphere. You can also change the model of your car. Creators divided all presented models into several groups, in which you can definitely find something suitable for yourself.

In fact, Traffic Run! is the simplest arcade race, which controls include only one function. This time killer has no plot and provides players with an opportunity to start playing immediately. The arcade game captivates with its intuitive controls, as well as the simple specifics of gameplay.

Traffic Run! is the simplest game that does not require any special skills from you. That’s why this project came to the taste of many fans of racing games on Android.

How to install Traffic Run! Mod?

Don’t forget to delete the original version of Traffic Run! before installing our modified version to prevent errors during installation process.