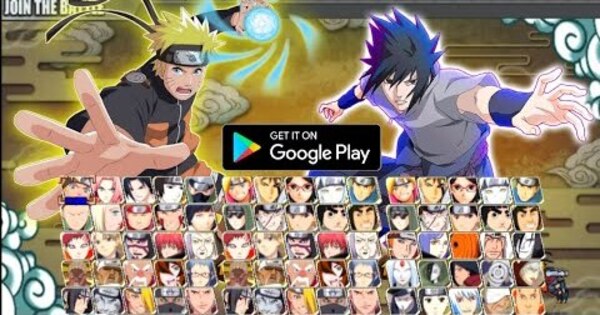 Ultimate Ninja Legend Super is a casual action game from the Colorful Box studio. This game will attract fans of anime and manga, fans of series about Naruto and Sasuke. There are single player and multiplayer modes. The game has a strong competitive spirit. You will meet many heroes, each of which will have their own characteristics. Developers literally transferred everything to the project from the famous manga and anime series. This and similar characters, their abilities, surroundings, names of locations. If you are interested in anime, then also download Mobile Legends: Bang Bang.

The passage of the storyline and completing tasks look very impressive due to the many animations and colorful battles. More details in our review.

In terms of gameplay, Ultimate Ninja Legend Super is a simple third-person action game with fighting game elements. In battle, you will control a shinobi, a ninja with various unique skills, and not always associated exclusively with martial arts. Your goal is to defeat your opponent. It can be a bot or another gamer, depending on the selected mode, although the focus of the game is primarily on multiplayer. Each hero has several skills. In order to open especially strong techniques, that is, combat skills, you need special cards, just like for shinobi.

As for the controls within the gameplay, here it is as simple and intuitive as possible. On the left of the game screen is a joystick, which is responsible for the movement of shinobi in battle. On the right is the skill wheel. The choice of target is determined automatically, you only need to make sure that your hero looks towards the opponent during the use of skills.

Since this game focuses on manga and anime, one would think that the narrative here corresponds to the main events of the arcs of the original source. However, it is not. The game does not contain a single-player campaign as such at all. Main characters resemble all the main periods of the manga’s narrative.

There is a mix of them and players can choose which of the forms of a particular character to play at that moment. As for the game modes themselves, they are diverse here. You can go one-on-one, or you can team up and go 5v5. As mentioned earlier, Ultimate Ninja Legend Super focuses on multiplayer, although you can also play in single player mode.

The game features 3D anime-style graphics. There are no surprises in this matter, in terms of visualization. It resembles other similar fighting games, except that the effects of applying effects techniques here are not so bright.

We recommend downloading Ultimate Ninja Legend Super mod for unlimited money. This will help you achieve all your goals in the shortest possible time.

Ultimate Ninja Legend Super offers almost all the main characters from your favorite anime, which allow you to immerse yourself in epic battles and get many bright emotions. Remember that all the heroes presented in the game have their own unique abilities that players need to take into account. Watch the actions of your opponent and try to inflict as many powerful blows on him as possible, without leaving him even a single chance to win.

Fight with an opponent one on one in the single player mode. However, the command system allows you to join forces with your favorite characters, which may increase the intensity several dozen times. Take into account the skills of your character and try to use all his tricks, getting the maximum possible number of victories. Particular attention was paid to the developers to create the most simple and intuitive controls that will definitely not cause you any questions. Be sure that a whole sea of ​​epic confrontations awaits you ahead, which allows you to get to know your favorite characters better and get many vivid emotions.

Ultimate Ninja Legend Super is an exciting project about the adventures of your favorite anime characters. Fight in single player mode or try your hand at multiplayer.