Ultimate Tiger Simulator 2 is a sequel to the game about the life of a tiger in the wild. With its help, you can plunge into the world of an ordinary tiger, which is learning to survive in a difficult and dangerous world. You start the game alone, as your protagonist is hungry and thirsty, which means that you have to hunt the surrounding animals in order to survive. The entire animal world is divided into dangerous and non-dangerous animals for you, so be careful and try not to attack too large prey. Explore the scenic world around you and enjoy the beautiful views. Fight to the death with other animals, because only one can survive. Create a whole flock of tigers and hunt together. Improve your skills to become stronger. These and many other possibilities are available in this project. Also, download WildCraft: Animal Sim Online 3D and Ultimate Horse Simulator 2.

Every player of Ultimate Tiger Simulator 2 will appreciate the realism and love with which developers created the entire surrounding world in the game. To begin with, during the adventure you can meet dozens of animals, including deer, snakes, elephants and crocodiles. Each of them lives only in their own specific zones. Therefore, alligators swim in the water and elephants or giraffes prefer tall trees where you can eat.

During the gameplay, birds sing, and stormy water bodies or ancient ruins of temples now and then replace the jungle. By the way, artificial intelligence of animals got some upgrades compared to the first part. The tiger cannot just walk up to the weaker prey. You must act silently, as you will have to go in pursuit otherwise.

Thanks to the modernized system of relationships between tigers, you have the opportunity to find a flock and become its leaders. Tigers appreciate your caring actions towards the little members of the pack. It is worth noting that Ultimate Tiger Simulator 2 has a kind of reputation system, so if you want to find your family, you should not violate the so-called tiger code.

Up to ten animals can gather in one flock. Look for your other relatives in the vast locations, complete their quests and recruit them into your flock. Help raise the young so that they become strong and courageous. After all, eventually they will grow up and become full members of your pack.

Epic battles to the death

As stated earlier, your charge needs to eat constantly in Ultimate Tiger Simulator 2 in order to function properly. As you can imagine, the tiger is a predator and the meat does not grow on the trees. That is why the user has to track down other animals and engage in combat with them. It is better to hunt defenseless animals, but you can fight a tiger, a crocodile, or a rhino. When you eat prey, your vitality level increases.

During the battle, the tiger can hit the opponent with different blows. In addition, three battle cries will be available to you, which help intimidate prey or, on the contrary, make it even more ferocious towards you. In addition, the tiger can run, jump and swim. However, you cannot run constantly, since the fatigue scale fills with time.

Ultimate Tiger Simulator 2 offers users superb AAA computer quality graphics. Moreover, each player can customize it for himself. If your device does not support high resolution and detailed textures, then you can make the graphics a little worse. In addition, you will surely like the soundtrack in the project. Starting from the singing of birds, which takes the player into picturesque forests, ending with the roar of a tiger and the sounds of other animals.

We suggest you download our mod menu with several convenient bonus features. This is immortality, unlimited points for upgrading skills, as well as absence of the tiger’s need for food, water and rest when running.

After starting Ultimate Tiger Simulator 2, you will see a special icon in the upper left corner. Click on it to open the mod menu, where you can set the desired parameters. You can turn them off at your convenience. The mod is completely safe for your android device, so do not be afraid, but rather download a modified version of the application. 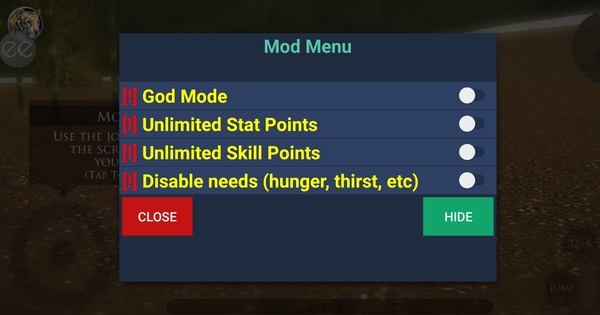 It is also worth mentioning the possibility of pumping your tiger. First, you can change the appearance of the animal by customizing it to your liking. Increase or decrease the height, size and length of the animal’s tail to make it unique. Get experience points for completing tasks and killing you. Spend them on improving the characteristics of the tiger. For example, there is an opportunity to increase his strength, ability to regenerate and tracking skill.

Another feature of Ultimate Tiger Simulator 2 is the realistic change of weather conditions and seasons. It doesn’t matter what the weather is in the location, hot heat or severe frost – you will always be hungry and ready to hunt animals. There are a lot of them here. In addition to those already listed above, there is a chance to meet a crow, stork, flamingo, raccoon, lion, lynx and many others.

Ultimate Tiger Simulator 2 allows the user to feel like a real tiger and plunge into the world of wildlife. Hunt or simply enjoy the scenic views around.