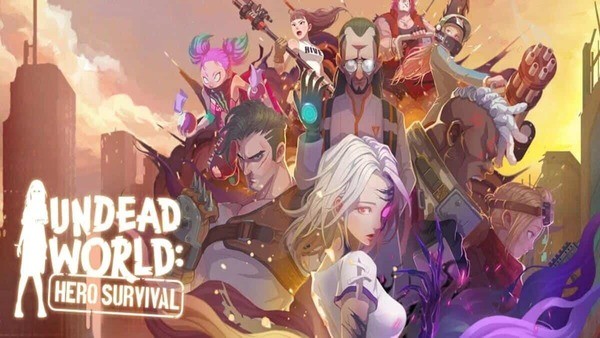 Undead World: Hero Survival is a strategy RPG from the developers of DoubleDown Interactive LLC. Your main task in this application is to assemble a team of brave heroes and set them up against crowds of zombies. There are fifty heroes in the game in total. Open them all, but remember that there can be no more than five characters on the battlefield. Upgrade your heroes, equip them with modern equipment and supply them with the best weapons. Use super skills to inflict devastating damage on enemies. You can play on your own or you can turn on auto-battle and enjoy the colorful battles. The main thing is to properly arm your people, choose the right heroes and correctly place them on the battlefield. Experience different game modes or spend time with friends in this exciting project. For RPG fans, we also recommend downloading Shadow Knights: Idle RPG and The Seven Deadly Sins: Grand Cross.

Undead World: Hero Survival has already more than 50 thousand downloads. The average project rating is at a high 4.6 points. Let’s consider the game in more detail.

After the game start, you will have only two characters at your disposal – a swordsman and a girl shooting from a bow. You need to place them in slots and go into battle. There are five slots in the application in total, that is, you can put up a maximum of five heroes for battle. However, there are fifty of them in Undead World: Hero Survival! They open as you progress. Each of them has its own characteristics, features and special skills. Someone prefers close combat and someone long-range. Others use magic. Accordingly, the amount of vitality, damage and protection indicators may differ. Different heroes can wear different clothes. The choice is great and only you decide who will be in your starting five.

Based on the previous point, you need to understand that there can be a huge number of Undead World: Hero Survival tactics. To begin with, place any ranged heroes away from zombies so that they can shoot at them from afar without taking much damage. At the same time, send the most tenacious characters into the very heat of battle. Don’t forget about special abilities. Someone can heal your characters and someone can inflict powerful damage in the area. Activate your super skills in time and choose the right composition of your team. You have the ability to move around the battlefield, so come and go when needed.

Undead World: Hero Survival would be too boring to play with no hero leveling system. To increase one level, you need a certain amount of in-game currency. At first, spend little money on one improvement, but do not forget that you have many heroes and it is advisable to pump at least five. In addition, after each level, you will receive a random reward, including ammunition and weapons. Do not forget to update your characters’ equipment in time to make them stronger and more dangerous. Accordingly, different heroes need different weapons. For example, the shooter will not be able to arm himself with an ax, as well as wear heavy armor.

Undead World: Hero Survival has many ways to spend time with interest and benefit. Try to play the campaign mode and go through level after level. Gradually, tasks become more difficult, but you will also become stronger. If you get bored with the standard playthrough, you can try out other modes. In the end, enter the arena and fight other players online in exciting PvP battles. There is also a survival mode. Its essence is as follows: zombies will go at you in an endless stream. It is important to hold out as long as possible in order to try to set the record. If possible, you can share it with your friends and other users of the project. As you can see, the choice of modes here is quite extensive, so everyone can find something to do to their liking.

Undead World: Hero Survival has colorful graphics, especially the developers succeeded in the scenes when the heroes use a special skill. You will also enjoy rhythmic combat music and sounds from the battles that can take you into the game world.

We bring to your attention a mod for god mode, as well as for increased damage. To activate these indicators, after starting the game, click on the circle in the upper left corner of the screen and enable the desired characteristics. Please note that after installation, the application will download additional files, so prepare a place on your device in advance.

Important! The mod works, but you can get banned for using it! Use a mod with this factor in mind or do not use it at all.

Undead World: Hero Survival is an RPG game where dangerous zombies of various kinds will raid your squad. This is a role-playing project with a team structure, a zombie apocalypse setting, as well as very nice graphics and a variety of gameplay opportunities. There will be battles and various mini-games aimed at obtaining valuable prizes and rare loot items. Do not forget to replenish the collection with new heroes and develop their skills. Fans of simple entertainment will be more than satisfied with the project features. 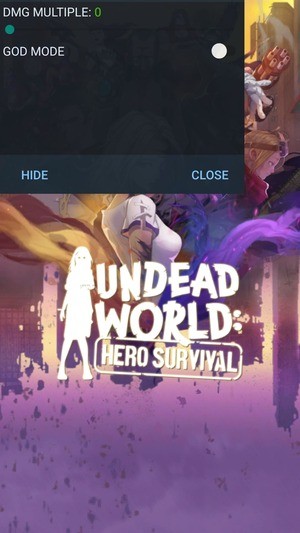 The main goal is to repel all attacks without losing fighters and move on to the next stage. The application has auto battle option. You can activate it by clicking on the corresponding button. In this case, all battles take place in automatic mode and you will only observe. However, if something goes wrong, you can always turn off this function and join the fight personally. Hire heroes from different factions and enter the battlefield. Destroy all zombies to restore peace and order in this world. Equip your characters with the most powerful weapons and the best armor to succeed. Don’t forget about special skills.

Undead World: Hero Survival is a great game for those who do not like to strain too much. You can play both in automatic mode and independently. Destroy zombies and collect epic heroes.