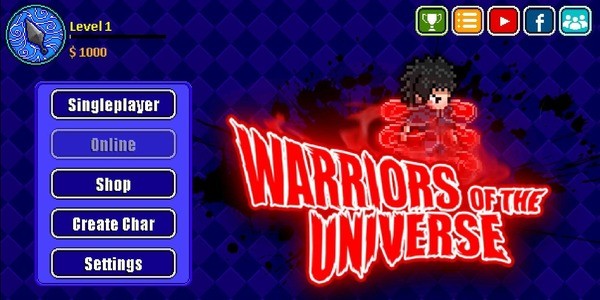 Warriors of the Universe is an action fighting game with platforming elements. You can fight many characters you know from the anime, for example: dragon warriors, ninjas, Shinigami and superheroes. In addition, you have the opportunity to create your own character in an advanced character editor, available to all players without exception. You can create and change not only the appearance of your characters, but also skills and combos that they can use. The game offers many different game modes, as well as convenient multiplayer. By the way, if you love pixel art in games, then we also offer you Prizefighters 2 and Bonetale.

Warriors of the Universe has over a million active players and more than eighty thousands positive reviews on Google Play.

Create your own characters or choose eight ready-made ones to play in team battles, defeating virtual enemies and enjoying the fighting game. Be nostalgic, remembering how you sat with friends in the 2000s and played fighting games on consoles. Enter the Warriors of the Universe multiplayer mode and fight against your friend one on one. Play tower mode, fighting with a large variety of enemies, defeat the boss and take the reward for which you climbed the dangerous floors with such difficulty. Survive in invasion mode, fighting hordes of enemies that roll over you in waves one by one. Finally, improve the characteristics of your character and get various rewards.

Warriors of the Universe can boast of a huge number of popular and not so popular characters to choose. Moreover, they are unique and have their own abilities. Someone has various transformations, while others have separate special abilities and super powers. For example, a dragon warrior can transform. Various ninjas, Shinigami, assassins, superheroes and many other characters are available to you.

Create your own unique hero for battles.

You can work out in detail and create your own unique character, which can become the key to your victories in battle arenas in Warriors of the Universe. You can fully customize your character externally, changing the color of any of its elements, from skin to weapons. Choose any hairstyle, clothes and weapons that your character can use to fight. In addition, a large number of techniques that your hero can possess is a great addition to customization process. For example, you can use ki-ball, energy explosion, fire energy, wind power, dragon’s shield and a large number of others. Overall, there are 7 separate slots available, as well as a large number of custom items.

Graphics in Warriors of the Universe have a pleasant pixel style, reminiscent of games of the late nineties, popular during the days of video game consoles. Characters and game elements surprise with its elaboration. The interface is easy to learn, understandable to anyone and pleasant to a human eye. Music accompaniment concisely helps you immerse yourself in the gaming universe. In-game sounds do not draw away too much attention, but help to focus on what is happening on the screen.

Warriors of the Universe allows you to earn in-game currency for defeating enemies. At the same time, the game can boast of huge number of locations, characters and items available for purchasing. You have to play for a long time and save up currency to open all the content initially available, as well as create own interesting characters. In addition, you can donate a large amount of real money to the game and get everything you want right away. However, not everyone is willing to pay money for and not everyone is willing to spend hours, days and weeks to get a new character. We can help you solve this problem by providing an opportunity to download the mod for unlimited money.

We tested Warriors of the Universe on our android devices to provide own opinion about above-mentioned feature. Based on the results of our check, we can assure you that we did not have any problems during playing this game. From the very beginning, you have an unlimited amount of money in your account that you can spend on strengthening existing characters, as well as unlocking new ones. Therefore, this mod opens up new aspects for you that you might not have noticed while playing the usual game version.

Gameplay in Warriors of the Universe reminds a simple fighting game with platforming elements. A large number of different techniques, skills and various combinations are available, as well as many different locations. Different characters that you can open also add variety to the gameplay. Moreover, special opportunity to create your own great hero gives the game a special flavor.

Enjoy the wide possibilities of this seemingly nondescript game. Choose one of the many modes and join the battle in Warriors of the Universe. Learn secret techniques, choose among a huge number of characters and go to war with the forces of evil. Most importantly, be on lookout for every second of the game, because if you get distracted even a little, you risk missing a series of hits.

Warriors of the Universe is an interesting fighting game that allows you to get a unique gaming experience. Moreover, the feature of creating your own character adds points to the game in user eyes.

How to install Warriors of the Universe Mod?

Don’t forget to delete the original version of Warriors of the Universe before installing our modified version to prevent errors during installation process.