Weapon Master 3D is an interesting project from Mille Crepe Studios. In this game, you need to supply his army with weapons, and then oppose the enemy troops. First, you need to establish production chains. Start by making swords and equip your soldiers with them. When everything is ready, advance to the enemy positions and converge in hand-to-hand combat. Subsequently, the weapon will become more and more deadly, and you will become more and more powerful. Start your journey through the location of the first level and try to get to the end, defeating all opponents on your way. We also recommend that you download Rude Racers and Big Farm: Mobile Harvest.

Weapon Master 3D is a classic game where you have to run around your base, collect resources and trade them for something useful. It all starts with the fact that you have a certain amount of dollars in your account. Build a workbench to make swords. Then equip units with these swords and get cash for it. The more you build the more money you will have. 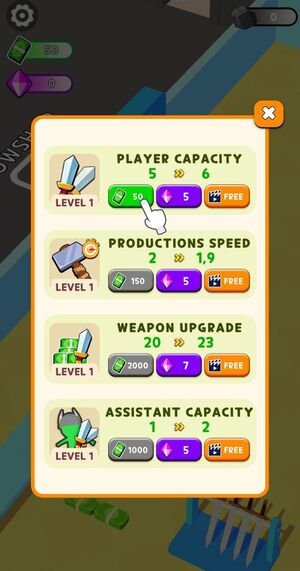 In addition, you need to develop and improve buildings. For example, enlist the help of a manager who can make your hero faster or stronger in order to carry more things. In general, this application requires the user to comply with the rules of time management, because everything needs to be done right on time.

Pass one Weapon Master 3D level after another and get a reward in the form of coins. Unlock new characters and get yourself the weapon that you like. There is plenty to choose from here, you can pick up a sword, bow, automatic weapon or an ax. Your hero will not fight directly, as your wards will fight, armed with exactly the weapons that you give them.

It is worth mentioning that not all weapons will be available at the initial levels. Each type of weapon, like heroes, will open upon reaching a certain level. However, there are good news, as players can pass the levels quickly enough.

Go to battle against the bosses

At the end of each level in Weapon Master 3D, you have to fight enemies that may well outnumber you. In some cases, we will talk about a boss fight, which has an impressive size and strength. Pumping can help you in passing the levels. 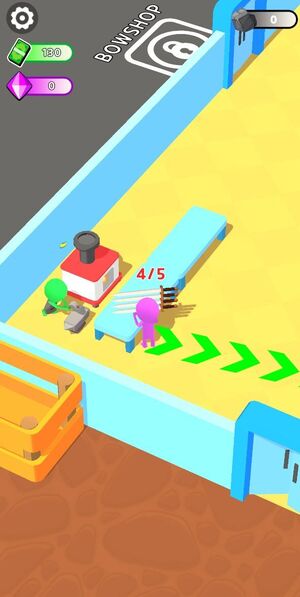 The more fighters you have from the very beginning, the more effective the battle will be and the greater the chance of ultimate success. By the way, each unit has a certain level here. Therefore, it will be difficult for first-level fighters to resist against high-level characters.

We recommend you to download Weapon Master 3D mod for unlimited money in order to get hold of any weapon that is in this game even faster.

The single player campaign in Weapon Master 3D will provide you with a huge number of levels, which difficulty increases quite quickly. You get weapons at your disposal, supply them with units and go to fight. In general, this applies to all levels of the project. Receive a certain amount of in-game currency for the battles won. 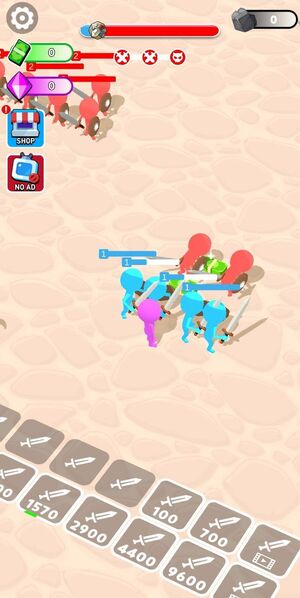 You can spend this currency on improvements, which include increasing free places in the gang and buying new members. The purchase of characters occurs in the form of the acquisition of cards, each of which corresponds to a specific fighter.

Weapon Master 3D is a time killer that will require the player to strictly adhere to the period. In general, this is a simple game, but it has its own interesting features.