Western Sniper – Wild West FPS Shooter is an interesting virtual shooting range that combines elements of dynamic action and puzzle. This game is an exemplary time killer, which is going to amaze you not with plot and prescribed characters, but with its unusual gameplay. Main goal here is to kill all enemies with no ability to move around the playing field. You have a range of weapons in your hands with which you can punish bandits. All this takes place in setting of the Wild West. You will also be pleasantly surprised by the bonus levels, within which you can earn currency to improve your weapons. It is also worth highlighting physics of characters, which adds some realism to the gameplay. Don’t pass by other new shooters such as Zombie Frontier 4 and Dawn of Zombies: Survival.

The most ordinary people present enemies in the game, who can walk around the location. All you need to do is aim at the enemy and take a shot. Over time, number of health points for opponents grows, so try to improve your sniper rifle or pistols to increase its destructive power. We should say right away that it is easy to lose here, because enemies shoot back at you. At any time, you can replay the level if you feel that you do not have enough lives for success.

Plunge into atmosphere of the Wild West

Gameplay takes us to North America at the end of nineteenth century. If you are interested in theme of Gold Rush and development of USA wild territories, then you will definitely like this project. All action in the game takes place somewhere in Texas. At the same time, you may be pleased with a variety of complex locations. Firefights in saloons and city streets are too easy for developers of Western Sniper – Wild West FPS Shooter. Try to kill enemy who is on the moving train. Hit an enemy in head while on a boat trip. There are also static locations where targets don’t move, but there are not very many of them in the game.

Globally, Western Sniper – Wild West FPS Shooter has two types of weapons – sniper rifles and duals (double pistols). Rifles are great option for ranged battles and pistols are for short-range targets. As you progress through stages, you gradually unlock new sniper rifles and pistols, which differ from each other in destructive power. It is worth saying that upgrading the rifle periodically changes its appearance, which somewhat affects gameplay variety. All improvements here come at expense of in-game currency, which you receive for completing stages. If you agree to view commercials, then it is possible to double this reward.

The game is a simple 3D shooter. At the same time, project features good physics, since recoil of weapon is important here, as well as lead when firing. Developers have added high-quality sound component to the project. In addition to sounds of shots, these are also all recognizable attributes of te Wild West, including sound of harmonica. 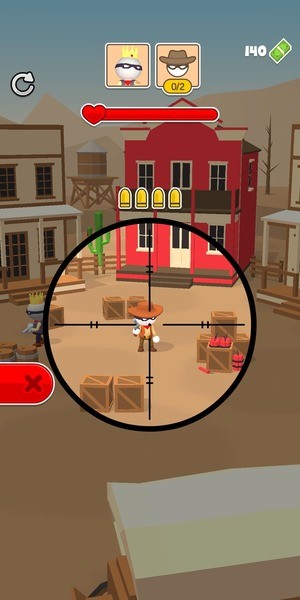 We bring to your attention a modification for an infinite amount of money. Thanks to resources, the user can buy new types of rifles.

Our team has tested functionality of Western Sniper – Wild West FPS Shooter and unlimited money mod for ease of use. We can confirm everything works fine. You don’t need to take any action to use it. Just download and install the mod on your device. We have also checked project security, so you have no cause for concern.

It is unusual mixture of virtual shooting gallery and puzzle, so focus all your attention on locations with goals. Essence of each stage is that you need to find a way to eliminate all presented targets in minimum number of shots from sniper rifle or two pistols.

You can either shoot at each enemy separately or try to destroy buildings in order to bury all the villains under the rubble. Variability of walkthrough is one of the main project advantages. Here you can use a variety of methods and ways to achieve your goal. For example, you can try to get into mechanism for coupling carriages and unhook train with enemies from locomotive in order to prevent them from killing you.

As the game progresses, you have to complete hundreds of levels divided into chapters. They differ in appearance of locations, as well as opponents. Gameplay of Western Sniper – Wild West FPS Shooter reminds a classic arcade game. You need to complete the current level in order to move on to the next, it is impossible to jump over several tasks at once. You must destroy all the targets in front of you to complete the quests. By the way, there are skins in the game – they allow you to customize the hero and give him a new appearance.

Western Sniper – Wild West FPS Shooter is an excellent shooting range simulator with its own interesting features. This project is great for killing some time.