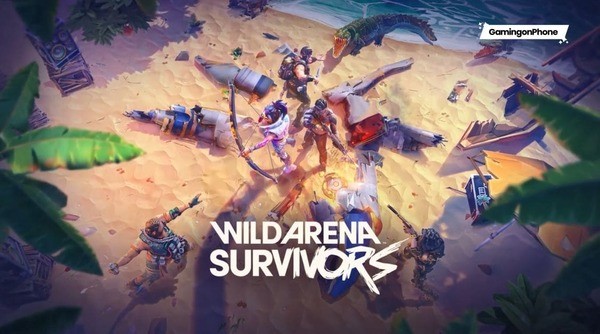 Wild Arena Survivors is an action game in the battle royale genre. Here you can play as heroes with unique skills, destroy enemies on an exotic island and find cool equipment. The game offers not only the mechanics of a shooter with an isometric camera arrangement, but also other gameplay systems. The exotic island is full of resources that players can use to discover and upgrade new survivors. These survivors have their own abilities and skills that will give players an edge over their opponents. We also advise you to download Monster Shooter: Space Invader and Total Destruction.

Choose one of several characters and travel to an island where a billionaire crime lunatic put on a survival show. Matches last an average of ten minutes and arenas are designed for 40 players. Single and team game modes are available for two and three survivors.  If the plot intrigues you, then read our review.

The general gameplay of Wild Arena Survivors is that you will control one character and do whatever is necessary to achieve victory. Here you will find several full-fledged modes implemented on unique maps. Each map is a limited playing field, which contains obstacles, necessary buildings, spawn points for the characters of both teams and much more.

It is noteworthy that almost the entire environment is destroyed after a few well-aimed shots or strikes. This fact allows skilled gamers to pave themselves additional paths and loopholes to the enemy base.

Each hero in Wild Arena Survivors has own unique set of skills. As you level up, unlock new abilities and upgrade existing ones. When the hero reaches the maximum level, an additional passive skill will open, giving a significant plus to attack or defense.

Play with friends and make up for each other’s shortcomings by choosing complementary characters. Pull the enemy towards you with special abilities and destroy in close combat or shoot from a long distance, depending on which character you use.

Work out the best tactics to win

Unlock characters of a wide variety of rarities from legendary heroes to common characters, which can compete with the strongest opponents using elite warriors when skillfully used. Choose the right strategy and be able to repel the attack of any enemy. To defeat each character requires an individual approach. Each has its own weaknesses and advantages to use at all stages. Use skills correctly and survive in the hottest battles.

Now, there are not many modes in Wild Arena Survivors, but in the future there should be much more. Every day the set of cards changes and new improved stages appear. Every few hours, the list of locations is updated and the location of boxes and secluded places changes.

You can never study a map beforehand. This is very convenient, because you will never meet rivals who have played hundreds of matches on a single map. Learn about all the secrets and taking advantage of all the intricacies of tactics and cover opportunities.

Befriend your favorite Wild Arena Survivors players and invite them to co-op mode to complete challenges and rank up. Win together with a faithful friend in skirmishes and team battles, in which other players will participate in addition to you. You can take up to two friends in a team and you will have a full-fledged squad to complete the arena or defend your base in the attack mode on the safe.

Collect as much energy as possible by killing other characters and destroying crates placed in the most secluded places on the map. Hide in the bushes with melee characters and launch surprise attacks on lingering enemies passing by your ambush. At the same time, you should carefully check the bushes for the presence of an enemy ambush. You never know what awaits you in this or that thicket.

Wild Arena Survivors is an interesting tactical shooter that allows you to face thousands of players from all over the globe in fun battles. Hide and wait for the right moment by setting up an ambush, or attack immediately, only seeing an enemy character.