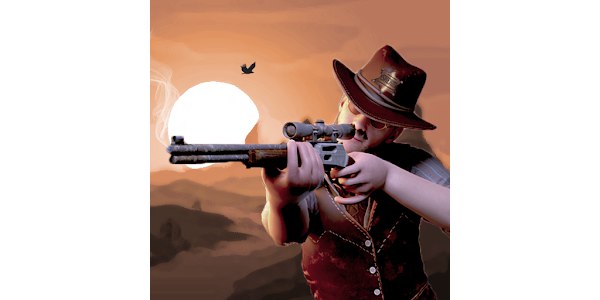 Wild West Sniper: Cowboy War is a cool and addictive symbiosis of shooter, action and story-driven third person adventure. Taking control of a character with a rifle, the user will take revenge on various offenders, entrenched in towns and villages. Demonstrate all his skills to quickly aim and shoot. Collect various bonuses and equipment, ammunition and boosters. Competently conduct research and improvements between levels. Shoot at the enemies that will look out of the windows, hide in the trees, crawl, run, jump and even fly. Get money for well-aimed hits, hone your skills in various modes, discover many new and interesting things. If you like shooters, then download Alphabet Shooter: Survival FPS and Shadow Legends: Sword Hunter.

You have to take on the role of one of the heroes of the Wild West, fight bandits, complete missions and restore justice in the western lands. 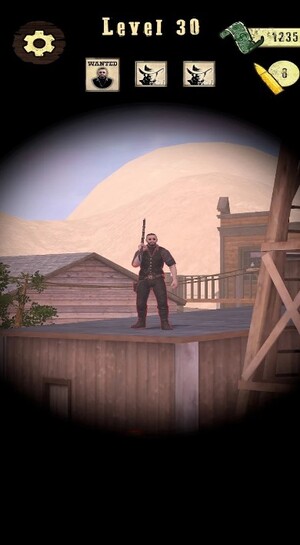 Immerse yourself in the atmosphere of the Wild West and feel like a real bounty hunter fighting criminal gangs, scammers and other bandits who break the law. You will need to complete a task to destroy the bandits, for which you can get valuable rewards. Find cover, aim and shoot to take revenge on the criminals and clear the territory from them. In addition to the standard locations in the form of streets of western towns, saloons and the desert, you will find truly dynamic shootouts on moving trains, in boats and other equally impressive locations in Wild West Sniper: Cowboy War.

Collect your thoughts, take a powerful weapon and go towards the enemies. Shoot from behind cover, win duels and shoot with two hands. Each of your battles in Wild West Sniper: Cowboy War will be simply unforgettable. Shoot every bandit you meet. Do not let them get into you and then victory will be yours. Buy a variety of rifles, revolvers and other weapons to deal more damage. It is important to keep your cool, but at the same time, be reactive in order to land an accurate shot first and destroy your opponent. 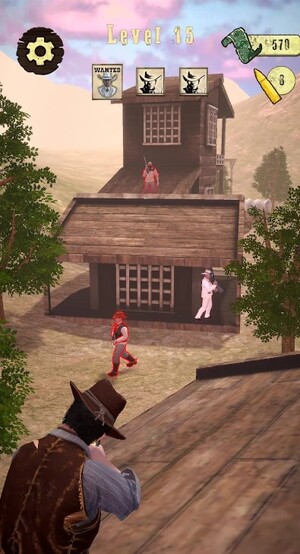 Become a fearless cowboy and go to battle where you will fight with the bandits of the Wild West. Go through difficult locations, defeat all your enemies on the train, boat and other interesting places. You are waiting for completely different game modes. There you will shoot duels or destroy the whole gang. Enjoy the sound effects that will give you the whole atmosphere of this place. You will also be pleased with a large selection in the store, where you can purchase outfits and weapons.

We recommend you to download Wild West Sniper mod APK, which will allow you to get free items without viewing ads.

Before starting Wild West Sniper: Cowboy War, you need to create your character and go through the initial tutorial to learn basic mechanics. Let the gameplay does not seem somehow complicated and very similar to similar games. It has his own specifics, because of which you should carefully consider all the prompts. The game pleases with a variety of sniper rifles. Get access to various types of weapons with different parameters in the rate of fire and damage, which allows you to implement different strategies. 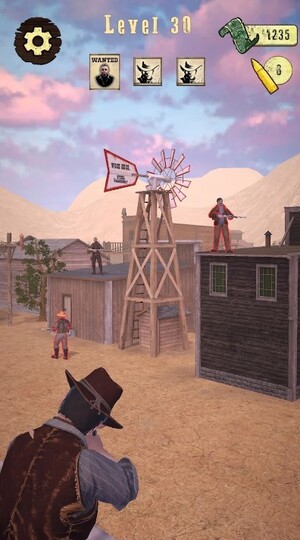 The opponents here are smart enough and can cause a lot of trouble. Especially at high levels, where they also become as powerful as possible and able to kill the player with a few shots. Thus, the developers want to force the players to download uniforms and weapons.

Wild West Sniper: Cowboy War is a great session shooter that will make you feel like a real sniper. Realistic special effects and graphics, reliable weapons – all this is waiting for you here.