World Conqueror 4 is a global strategy game on the theme of World War II and the Cold War, created by Chinese developers from Easy Tech. Become a military leader and take a direct part in the war. By choosing one of the countries participating in the conflict, the player begins his ascent to the heights of power around the world. To achieve success, it is necessary not only to acquire a combat-ready army with equipment, but also to establish diplomatic relations with other states.

Many famous generals will come to the aid of the commander, each of whom has his own strategy of warfare. Conquest mode, World War II, Cold War and Modern war unfolds on a global map of the world. Players have to control infantry and tank divisions of selected country, attack enemies with aircraft and missiles and capture cities and seaports. We also recommend downloading Godzilla Battle Line and Warpath.

There are not so many cool strategies for android, but World Conqueror is definitely one of them. Now we will explain why.

Scenarios are individual stories to play indecently. 61 scenarios are available. The scenarios are divided into 7 thematic campaigns. You have to go through them one after another. The order is as follows: a campaign for OSI countries (Germany, Italy and Japan), campaign for the Allies (USSR, Great Britain and USA), Pacific Ocean (Japan or Allies), Cold War (USSR), Cold War (USA), Modern warfare. The goal of each scenario mission is to capture or hold key cities, highlighted with a red circle. It is possible to complete any mission at normal and hard levels. The more difficult the task, the more resources are given out for its completion. The quests in World Conqueror 4 themselves are varied and each mission is unique. 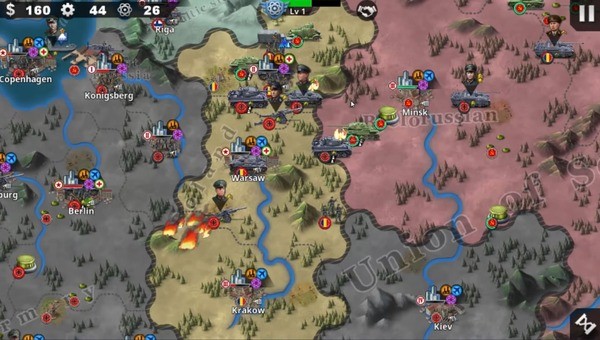 Conquest. You can select any country here. Achieve victory is by capturing all the cities and ports of the enemy. The following scenario start years are available:

Domination. Various single tasks await the user here. Among them are quests for the extraction of resources, construction of world wonders, tasks for destruction of enemy units and more.

The game is turn-based. During your turn, you have to move combat units, develop cities, hire troops, make flights, drop parachutists, throw missiles and nuclear bombs. Then the turn passes to rival countries. The countries go by turns one after the other.

The map in World Conqueror 4 is divided into hexes. Each combat unit moves a certain number of cells in any direction. In case of location of enemy unit or city on an adjacent cell, you can arrack them. When attacking, units lose health points. When they run out, the unit disappears. To control a combat unit, you can appoint a general, which greatly increases its combat value.

The city produces a certain amount of resources: money, technical resources and science. The resources produced by the cities in the scenario in any way affect global resources in headquarters with the same names. Spend resources in World Conqueror 4 on recruiting combat units, air attacks and paratroopers landing, missile attacks, nuclear bombs. Moreover, you can also improve city buildings.

To conquer a city, even an empty one, you need to shoot at it in order to remove the city’s defense points. If a combat unit defends the city when attacking, both the city and the unit get the damage. You can build many buildings in each locality. For example, an airport, a hospital, a missile silo, an institute, a military factory, a port and so on.

World Conqueror 4 allows you to control infantry, artillery, tanks and warships. You should also describe aircraft, missiles and nuclear bombs, which in fact are not combat units. You cannot find them on the map due to belonging to the cities. Any division or battleship can consist of 1 to 4 brigades. The more brigades, the stronger the unit. 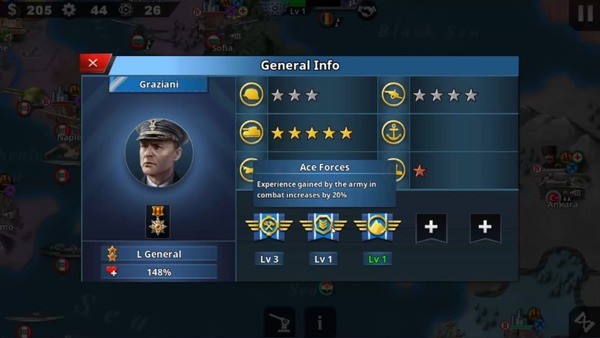 The number of infantry available for recruitment in the city depends on the city level. Tanks are much stronger than infantry are, but infantry divisions, unlike tank divisions, are cheap and do not require scientific resources for production. The main striking power is missiles and nuclear bombs. Missiles hit farther and stronger than aircraft, but become available later. There are four types of missiles in the game, from simple missiles to intercontinental ballistic missiles of medium and short range capable of carrying a nuclear bomb. They differ in damage dealt and attack range. As for nuclear weapons, there are four types of them in the game: a simple bomb, a hydrogen bomb, a technical phase bomb and an antimatter bomb.

World Conqueror 4 has graphics typical for mobile strategies, where there are no perfectly designed objects, but the user can control the whole situation at once. Most of the units and military equipment are quite schematic, but this does not prevent you from enjoying the gameplay.

Donation plays a rather serious role in World Conqueror 4. That is why the project has some negative reviews. Therefore, we suggest downloading the mod for free shopping, which can greatly simplify the gameplay. 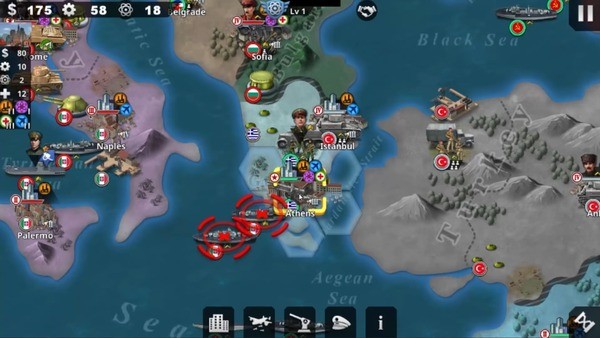 Another important component of World Conqueror 4 is the generals. Generals greatly enhance combat units. You can buy them at the headquarters for medals. It will be difficult for you to complete some missions without these commanders. Each general has his own rank, as well as special skills that strengthen your army. You can improve the artillery attack, aircraft, tanks, infantry or simply the mobility of troops.

The game takes place on a geographic map. It is a separate piece of land in the scenario, and the entire world map in Conquest mode. The world map is rather approximate, but, unlike European War 6, it is presented entirely along with Siberia, China and Australia. There are rivers and mountains on the map that slow down the advance of troops. You can also find there cities, ports and combat units of the belligerent countries.

World Conqueror 4 is perhaps the best offline strategy game on smartphones. You have 50 countries, 230 famous generals, 216 military units, 42 skills at your disposal. If you are interested in the theme of World War II, then be sure to check out this project.