WWE Mayhem from Reliance Big Entertainment is a wrestling sports action game with a lot of characters, linear playthrough and online battles. Advance the story along with your favorite characters, or try to knock out opponents in online battles. Developers constantly update the project, number of WWE legends is growing and the specifics of the gameplay are changing. If you have always dreamed of performing in the ring with John Cena or Undertacker, then this is definitely your choice. Download other action games from our site, such as Tekken 3 and Kick the Buddy.

Read on to learn about the main benefits of the game

Since the game has all the necessary licenses, the user in WWE Mayhem has the opportunity to choose among famous fighters, including John Cena, The Rock, The Undertaker, Ice Block, Calisto and others. Choose your favorite wrestler and set the heat on everyone else, or set against yourself the one who annoyed you for a long time, and practice your favorite techniques on him. 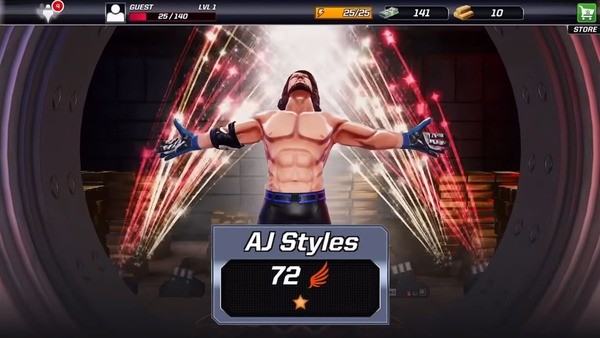 Choose from six types of fighters

WWE Mayhem player can choose a team based on his tactical vision of combat. All fighters has own classes: brawler (powerful fighter), high-flyer (fast and agile), superhorse (swoop specialist), showman (lover of beautiful and effective techniques) and so on. Each fighter also has own unique abilities and techniques, which gives the gameplay even more variety.

Customize your character as you see fit

During the game, you can unlock new costumes for your hero and dress him up in the most stylish and intimidating clothes. However, you cannot change anything – then the fighter will enter the ring in his usual attire, each of which here corresponds to the real outfits of active wrestlers. Personalize your character with a wide range of customization tools. 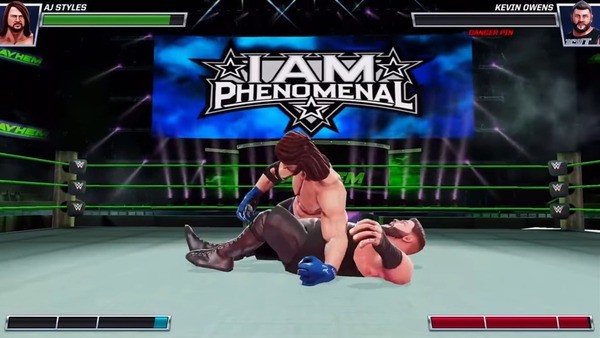 Fight with friends or other users online

If you are tired of battles with AI, you can always go online and challenge your friends. Just open the list of friends in a special menu item and send an invitation to your friend. However, if you don’t have friends in WWE Mayhem, then no problem. Go to the global server and look for an opponent from anywhere in the world – playing with a live person is always more interesting!

In terms of design, WWE Mayhem is very impressive. Brutality oozes from every pixel of this game and from every note of the soundtrack. The cool voices of the commentators, powerful referee with the microphone and the suit and tie all work well for the overall atmosphere of the game. In addition, the game implements many techniques of the fighters. Everything that happens on the screen can surprise you with its spectacularity, which will be the envy of many other projects of this genre. 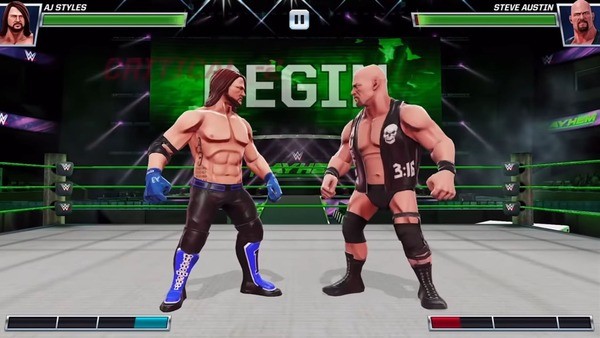 WWE Mayhem is free-to-play, although in-game purchases are available. That is why we offer you a modified version of the game. It allows you to get an unlimited money and enjoy the gameplay to the fullest.

Based on the test results, we guarantee that the mod for WWE Mayhem is completely safe for your device. In addition, it is serviceable and works flawlessly. After fully installing the game, you receive unlimited coins that you can use to unlock a variety of game content.

We are engaged in the fact that we go through season after season, fighting with this or that fighter. The main goal is to get along the chain to the champion of the season and defeat him. Over time, new battles, new tournaments and new fighters open up. 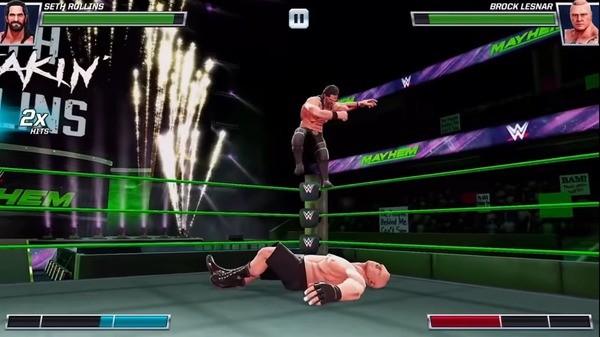 During the game, we also get some bottles, thanks to which we get the opportunity to improve our fighter. There are two parameters available for improvement: number of lives and blow power. Thus, after a few seasons, you can get an unreal tough warrior of the ring and swing at the championship in all possible tournaments.

By the way, sometimes it is possible to break the opponent’s leg or arm. In this case, we need to perform a certain combination of presses as quickly as possible in order to carry out a special move. You need to press very quickly, as opponent can free himself and take revenge.

WWE Mayhem is the simplest, but at the same time interesting fighting game. The game can appeal primarily to fans of wrestling. However, everyone else can kill time by choosing a new character and participating in spectacular battles.

How to install WWE Mayhem Mod?

Don’t forget to delete the original version of WWE Mayhem before installing our modified version to prevent errors during installation process.