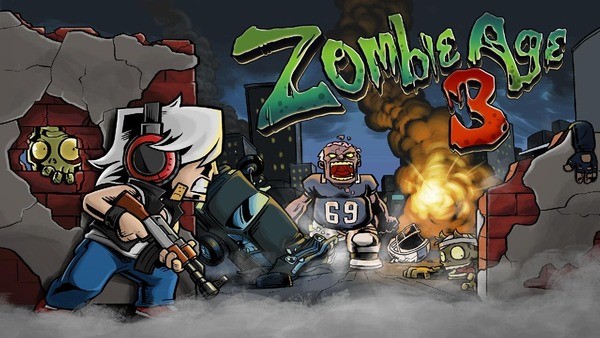 Zombie Age 3 is a shooter set in a zombie apocalypse setting. The main character has to complete a huge number of tasks, try numerous types of weapons and enlist support of allies to clear the Earth of zombies. Use a huge arsenal of weapons in battles with enemy, complete missions and earn money. The tasks in the game are diverse. You need to clean up locations and perform noble deeds, for example, protect a child from the dead. Test everything on zombies – from a regular pistol to a rocket launcher. Fight together with your valiant partners and call even Donald Trump for help! Finally, saddle up the bike and try it out in a very special game mode. We also advise you to download Bloody Bastards and Huntdown.

Do not close this page, but rather read our review on Zombie Age 3.

Participate in a variety of missions

At the beginning of the game, you will go through a short tutorial to find out all features and controls everything. Then you can enter the battlefield. Zombie Age 3 character has two main weapons – a hammer and a pistol. Later, you will use even a submachine gun that shoots in bursts. Mission objectives are extremely varied. In some, you just need to shoot a certain number of zombies that are coming at you from all sides. Other tasks require the release of the hostage or accompanying a person to a certain point.

There is also a completely original type of quest. Get a bike, and drive it past the crowds of zombies for a certain number of meters. The difficulty is that sometimes on the road you can meet leaders who are difficult to crash. You just need to go around them. It is possible to run over ordinary zombies on the rear wheel.

Many types of deadly weapons

It all starts with the fact that the main character of Zombie Age 3 has a regular pistol. However, access to new weapons will open quickly enough. You just have to go through a couple of missions. The app includes revolver, assault rifles including Kalashnikov, sniper rifles and heavy weapons. This includes the bazooka, rocket launcher and mortar. To unlock a new type of weapon, the player needs a certain rank. You can improve it, by completing missions. We should say that different weapons require different actions at the location. For example, if you throw a grenade, then you should throw it as far as possible so as not to explode. Do not forget about saving ammo, although the mod for unlimited ammo allows you not worrying about this.

Many heroes and improvements

There is a system for pumping the hero in Zombie Age 3, as well as acquiring new ones. Characters are unlocked as you progress through the story campaign. By the way, there is another interesting feature – helpers. Once every few hours you have the opportunity to use the help of third-party heroes who will give you extra fire support. The developers approached this aspect with humor, because even former US President Donald Trump can act as a partner. Take companions on very difficult missions, because their help is limited.

Among other things, every hero of Zombie Age 3 has several bonuses that he can take to each level. These are such simple things as a set of grenades or a magnet for coins, as well as cooler things. For example, for two minutes you can summon Iron Man, who will destroy everyone in his path. If you are having difficulties at the level, then ask for air support in form of Special Forces. Buy each such improvement before the level and then equip the main character. In total, he has three slots for these enhancements. In addition, player will be able to replenish his collection of bikes. Here the essence is the same – they open during the gameplay and cost a lot of money.

Zombie Age 3 features funny cartoon graphics. Despite the fact that there are many murders in the game, they are not scary or bloody. The project has an age limit of 12+ – medium violence. The sound in the app is top notch. Each weapon sounds different and the monsters make a terrible scream when they die.

All improvements in the application require game currency and there are two types of them in the application. In addition, players often do not have enough ammo at levels and have to finish off zombies with a hammer or knife. Therefore, we have prepared for you a mod for unlimited ammo and coins.

Initial mission of Zombie Age 3 is “First Blood”. Since the city is in chaos, we must take control of everything. The first goal to achieve is to kill 20 nasty zombies. However, we cannot complete this task just like that, so go to the player’s menu and learn main fighting techniques. Training requires 700 game coins. The time required for this improvement is 30 seconds. If you don’t want to wait and are ready to start playing right away, you can speed up this process for one green dollar. At the very beginning, the game provides $10 for any improvement. Take advantage of them any minute.

Zombie Age 3 is a very interesting game with an excellent storyline and many missions and tasks. It is worth noting the excellent graphics and pleasant music, which makes the game even better. The abundance of playable characters, a large number of weapons and the ability to play with friends made this action a great way to distract.