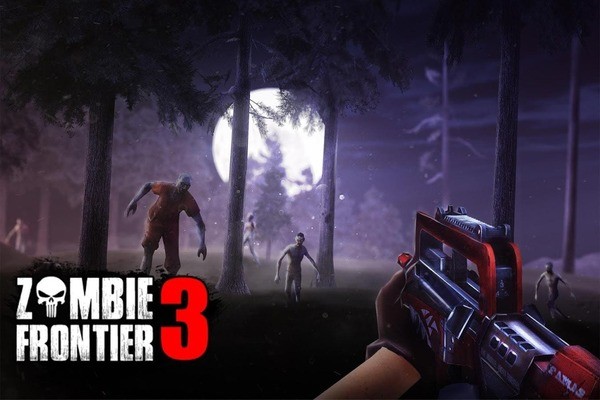 One of the most famous lines of games, Zombie Frontier, has received another story continuation. Not so long ago, Play Store users received a notification about release of the third part of franchise. Zombie Frontier 3 features another attack of the living dead, infected with unknown viruses. The war between zombies and people continues to heat up and the only thing that remains for main protagonist is to pick up a rifle and eliminate all targets infected with the virus. FT Games Developers, mostly known for The Godfather and Battle Night, invite users of Android platform to try third episode of the acclaimed game. By the way, you can also download Dead Effect 2 and Apex Legends Mobile to dive into the atmosphere of the best shooters.

All games from the series come down to eliminating people infected with a terrible virus, who are already more like the walking dead. Zombies engage in a real battle with people, so you have to win. Third episode of the famous shooter already has more than 50 million downloads in Play Store, while 500 thousand users rated the app at 4.1 points.

This time, gamers have to fight in four different locations. First of these turns out to be a hospital. Perhaps the most terrible place, because here you can meet a large number of infected people. Former doctors, nurses, as well as patients infected a terrible virus appear as enemies. The system is responsible for the movement of the protagonist itself. You only need to eliminate living corpses from each of the locations presented. 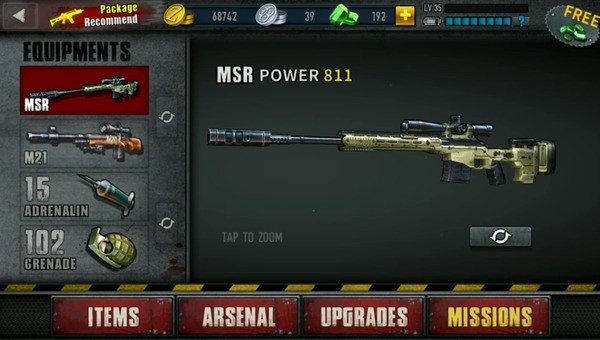 In first minutes of Zombie Frontier 3, you can use only ordinary pistol, but here there is an opportunity to purchase five different types of weapons. In total, there are more than 300 different pistols, rifles, machine guns and revolvers. Each of them has options for improvement by replacing old parts with newer ones. Therefore, you can improve the quality of shooting by changing the quality of cartridges. In addition to weapons, there is an opportunity to use first-aid kits to heal the main character, grenades to defeat a mass accumulation of zombies and adrenaline – a substance that helps to survive in apocalypse conditions.

Each location of Zombie Frontier 3 has its own certain number of levels, but there are more than two hundred missions of varying difficulty for the whole game. At the first twenty levels, the game seems simple, maybe even too easy. However, the main character has to visit other locations, where the number of zombies reaches a critical level. Each completed mission brings a certain amount of coins necessary to improve equipment.

Zombie Frontier 3 has a separate tab with special sharpshooter rewards. You can get them by following the description of each of them. For example, you can earn money for eliminating three hundred zombies, shooting walking corpses in the head more than eighty times and completing a certain number of sniper missions. Players can receive special awards in the form of cash, ammunition and bombs.

Completing each level brings gold coins that you can spend on new equipment. All that is available to you from weapons at first level is a pistol. If it works well against two or three zombies, then you need a more serious weapon against a crowd of enemies. The arsenal is very extensive, but remember that you can take a maximum of two weapons with you. In addition, the number of grenades in battle is also limited.

The graphics of Zombie Frontier 3 are typical for all the series. Here the location appears in high-quality graphics, placing emphasis directly on game heroes: bloody zombies, tattered clothes of survivors and realistic shots towards brutal monsters. The graphics create exactly that strange and dangerous atmosphere of the apocalypse. As for the music, you can clearly hear sad and little strange music in the background, both in the main menu and during the shootout. It allows you to feel that pumping atmosphere of the game. 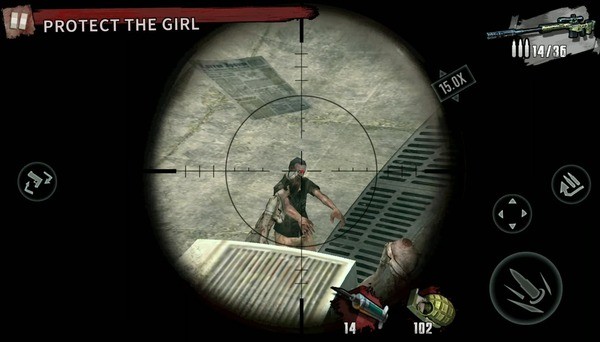 The protagonist of Zombie Frontier 3 has to spend a large amount of gold and silver coins, as well as gems to improve equipment. It can be difficult to accumulate them, but you need a good weapon now. Therefore, you have the opportunity to install a game with a built-in mod that allows you to spend gold, silver and gems in unlimited quantities.

Zombie Frontier 3 throws you into battle immediately after launching. It is training fight, but still. The controls are quite simple, but may seem a little unusual. Camera control joystick and button for changing weapons on the left, fire and weapon reloading keys on the right. Your character moves independently.

Already in training, everything is very serious. No plywood targets. Only real zombies, only hardcore. However, it is not too difficult to shoot them for the first time even for a beginner. The main thing is not to let them get too close. Their claws are strong and sharp and they will not be afraid to use them. Then three bright lines of scratches will light up the scree, and your health will decrease.

Next, you have to fight zombies level by level, knocking them out of buildings and from streets of your hometown. There are many different maps: a hospital, a bank, a shopping center, a police station and a construction site. Every time you have to go one on one against dozens of angry living dead. By the way, they look thematically. Their clothes corresponds to the location. However, ex-nurses, builders, and men in business suits demonstrate unfriendliness and a desire to eat you. 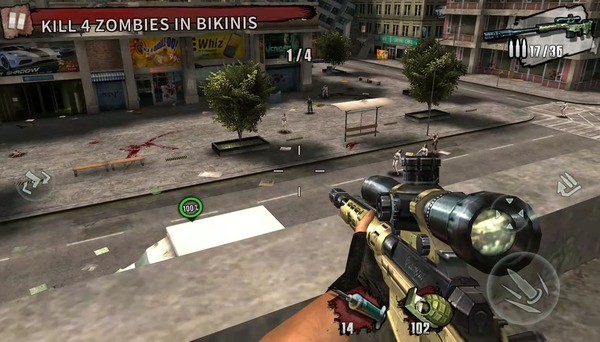 During the training process, you can learn all the subtleties of weaponry in the main menu of Zombie Frontier 3: reloading, improving components, as well as choosing required type of weapon. Already at the beginning of next level, you have to engage in battle with ferocious zombies that see the only living target in you. The player needs to protect himself and other survivors, clear all territories with zombies and improve the current weapon to eliminate even more living dead.

Third episode of legendary Zombie Frontier is a qualitative continuation of two previous installments. This time, players come face to face with another stream of infected people, visit new locations and try out improved weapons in the fight against the living dead.